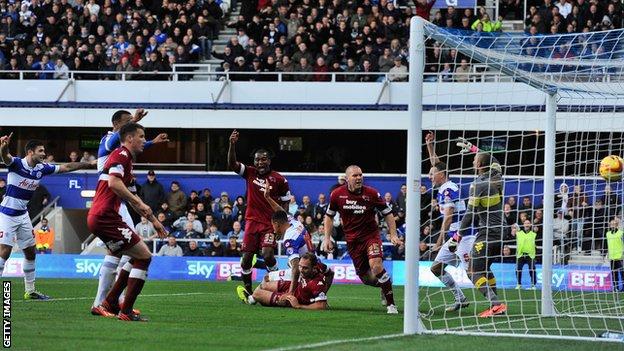 Queens Park Rangers returned to form in the Championship as Derby suffered a league defeat for the first time under new head coach Steve McClaren.

Jermaine Jenas's tap-in gave the hosts an early lead before Simon Dawkins levelled with a volley.

QPR went back in front in the second half when Clint Hill got the final touch to Alejandro Faurlin's free-kick.

Keeper Rob Green's late save denied Jamie Ward an equaliser as Rangers won for the first time in four matches.

The result keeps Harry Redknapp's men in third place, behind Burnley and Leicester, but the gloss was taken off their win when fans' favourite Faurlin was stretchered off with a serious-looking injury following a challenge on John Eustace.

Steve McClaren had been out of work since leaving FC Twente in February when he joined QPR's coaching staff in July, and spent nearly three months there before taking over at Derby

It took only 11 minutes for the Londoners to go in front as Matt Phillips put in a cross from the right, Charlie Austin forced a save from Lee Grant before Jenas converted the rebound.

The visitors equalised soon after when Dawkins rifled home after Ward's free-kick had been headed down by Jake Buxton.

McClaren had been on Redknapp's coaching staff for a spell before taking charge at Pride Park, and his new side continued to look threatening after the break as Ward's shot was parried by Green, but Chris Martin could not force home the rebound from an awkward angle.

The Rams were made to regret that miss when Faurlin swept in a free-kick from the right and Hill got the final touch as he, Jenas and Buxton all challenged for the high ball.

Phillips might have added a third when he cut inside and evaded two challenges before crashing a shot against the bar.

And Derby almost snatched a point as Green had to be at his best to deny Ward from an injury-time free-kick as the hosts managed to hold on ahead of next weekend's trip to fifth-placed Reading.

"It was a good game, it's just a shame about Alejandro Faurlin. He's done his knee and it doesn't look very good.

"I don't know how he did it to be honest, but it's such a shame for the lad. He gives us a good balance in midfield. We have picked up a few injuries though and might try to get a loan or two in if we can."

"My team can be proud of their performance. I know from working here with QPR's players that they're the best team in the league and will have no problems going up with the squad they've got.

"We stopped them playing and did everything well without the ball in the first half, but we could have been better with the ball. This is all about the long term. It didn't work out for us today but most of the time it will."