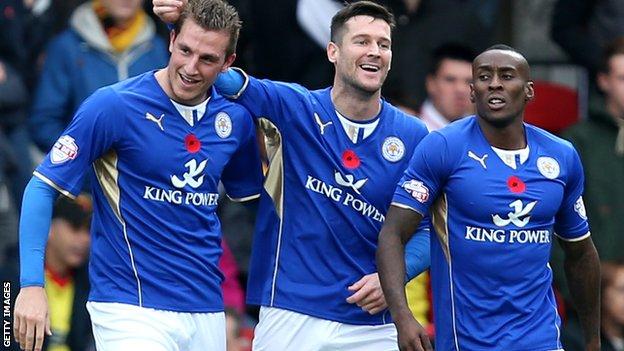 Leicester City recorded their 14th win from 19 games this season by beating Watford at Vicarage Road.

The visitors took an early lead when a clearance by Watford keeper Manuel Almunia hit Chris Wood in the face and rebounded into the net.

They doubled their advantage with a deflected Anthony Knockaert finish.

The two sides were meeting for the first time since their play-off semi-final second leg encounter in May, when Troy Deeney scored a late winner to send Watford into the final.

That match had finished at an exhilarating pace and this one started in equally explosive fashion as both sides attacked from the outset.

But it was a moment of misfortune for Almunia that resulted in the opener 10 minutes in. The former Arsenal keeper looked to clear a routine backpass but kicked the ball straight into the face of Wood and it bounced into the Watford net.

The bizarreness of the goal seemed to leave Watford stunned in the following minutes, and Leicester twice went close to adding to their advantage,.

Dyer thought he had doubled the lead when he rolled the ball into the empty net, but was flagged offside, and Wood also had the ball in the net with a header, but he too had strayed behind the Watford defence.

Watford improved as the break approached and Schmeichel produced a double save to keep out Lewis McGugan.

Marcin Wasilewski missed a golden chance to score Leicester's second when he powered a header over the bar one minute before half-time.

But a second did arrive for Leicester eight minutes into the second-half when Jeff Schlupp showed great persistence to muscle his way into the area and the full-back pulled the ball back for Knockaert, who slammed home from 12 yards.

That effectively put the game beyond the hosts, but it did spur them into life. Forestieri saw a low shot tipped round the post by Schmeichel, before the Danish keeper produced a superb reaction save from the striker at point-blank range.

However, Leicester added a third just before the end when substitute Gary Taylor-Fletcher released Dyer, and the burly winger made no mistake from inside the area.

"In the second half we should have scored, and if we had the story would have been different. But we gave away 30 minutes of the first half and against a team in form like Leicester, you cannot concede that.

"What disappointed me is how poor we were with the ball in the first 30 minutes. There was no imagination, no movement and no cohesion.

"I saw a reaction, I saw a team creating chances but it was too late."

"The win was underpinned by the team's performance. I thought we were very good defensively as a team and as far as I'm concerned it was a good all-round performance.

"We always looked dangerous, I thought we counter-attacked particularly well but this year our ball management has been a lot better than last season.

"We're doing OK at the moment and the players have continued to put an awful lot of commitment into the season so far."