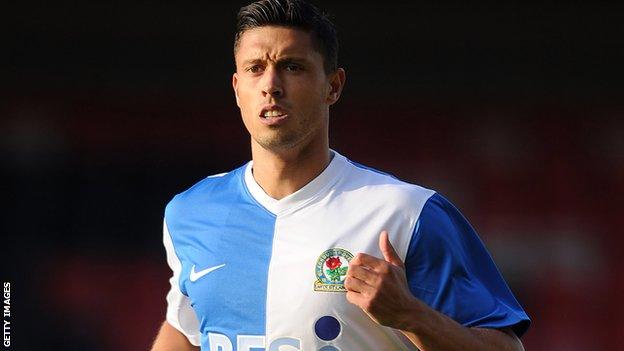 Jason Lowe scored his first goal for Blackburn as they beat Middlesbrough to end a run of three games without a win.

The midfielder, 22, scored late in the second half with a superb long-range effort to secure the three points.

Alan Judge's free-kick was tipped behind by Jason Steele, before the Boro keeper kept out a Jordan Rhodes header.

With the win, Blackburn move up to ninth in the Championship while the visitors, who have now failed to win away from home in their last six games, are 16th.

The hosts had the better of the chances in the first half, despite not dominating possession but Steele was equal to them all.

He tipped Judge's curling free-kick behind before making an even better save, adjusting his body to claw Rhodes's effort to safety.

Boro's first shot on goal also came shortly before half time when Kamara's downward header was scrambled away by Kean.

Emnes blocked Woodgate's goalbound header after the break as Boro pushed forward, but it was Blackburn who snatched the points thanks to Lowe's thunderous 25-yard strike into the top corner which gave the Lancashire side their fifth win of the season.

"It was a tough game though, there wasn't much in it, that's for sure. We know what we're trying to do and how hard everybody is working. We just go game by game and treat each game with the respect that it deserves."

"I think it was a hard-fought game with two teams competing well and it was a great goal to decide the game. I feel we didn't lose that game through lack of effort or desire.

"Blackburn to be fair kept the ball a bit better and were a bit more progressive but we're not a team at the top of the league. We're trying to improve and need to improve in those aspects of the game.

"I don't know (about the manager search). I just carry on. I'm sure the chairman is doing what is best for the club and he needs to. We need to pick results up from the players and staff. We have a wonderful club with a wonderful set of supporters."