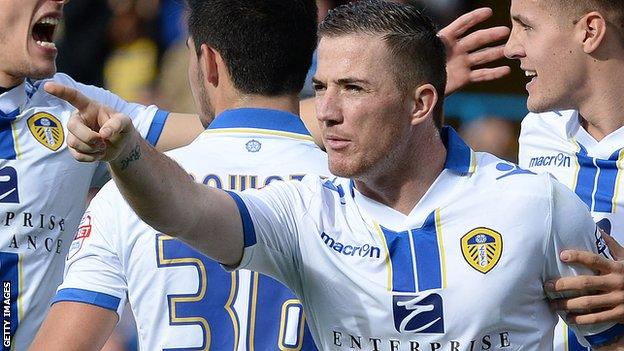 McCormack doubled the lead with a delightful finish from 18-yards after more good work by Austin, who also saw a shot deflected over the bar.

Yeovil, who are now bottom of the Championship, struggled to test Leeds despite some promising approach play.

Ross McCormack has now scored eight goals in 18 appearances for club and country this season - one short of his tally for the whole of last season.

They were never seriously troubled after taking the lead in the 48th minute.

Austin made a storming run through the midfield and McCormack finished from just outside the right corner of the six-yard box.

Leeds had some desperate defending to do as their opponents forced a series of corners but the struggling visitors failed to make them count and McCormack sealed victory with his fourth goal in five games.

Defeat for Yeovil sees them replace Sheffield Wednesday at the bottom of the table after the Owls' 5-2 victory against Reading lifted them out of the Championship relegation zone.

"It was a tough game and there was not much football played in the first half. In the Championship you have to grind it out at times and we did that. After the second goal we could have gone on to double our score but we are happy with a clean sheet.

"If we can be there or thereabouts at Christmas it will be interesting. We have some good young players who are learning all the time and we are close to where we want to be."

"We lived with the opposition for much of the time and didn't park the bus, but we need that killer instinct.

"We just have to hope our boys learn and improve quickly.

"We lack experience but that is something we will gain all the time so hopefully we will have a great second half of the season."