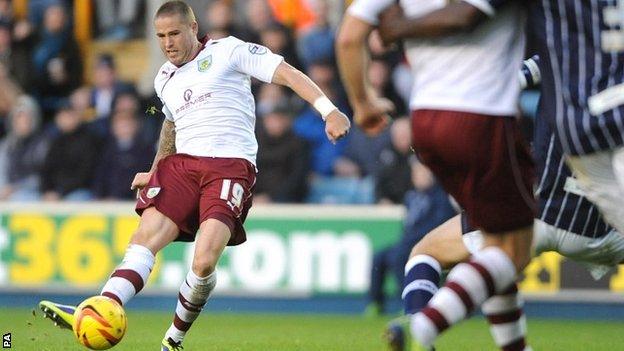 But Burnley hit back through Sam Vokes' header, his ninth goal of the season, following Kieran Trippier's cross.

Michael Kightly's shot was then touched in by Lowry but Burnley were unable to make it eight consecutive league wins.

It is seven years since Millwall last beat Burnley at home, a 1-0 victory in April 2006 that did not stop them being relegated to League One that season.

The point means the Clarets have failed to keep pace with their best ever start to a league season - 1897, when they won 20 and lost only two of a 30-game campaign in the second tier.

In letting slip their two-goal lead, Millwall recorded a third straight draw, and have now not won in the league since the end of September.

That will come as a disappointment to boss Steve Lomas after his side made such a positive start.

The hosts then took the lead on 23 minutes as Australian forward McDonald volleyed into the far corner from eight yards after Paul Robinson's accurate knock-down.

It was only the second time Burnley had conceded the first goal of a game this season but they were 2-0 down 15 minutes later, through an unexpected source - Lions centre-back Shittu netted with a deflected long-range shot that sailed past a wrong-footed Heaton.

The Clarets halved the deficit immediately through Vokes but at the start of the second half the hosts were again the livelier, Waghorn twice going close with shots from long distance.

But on 55 minutes, Kightly found space in the final third and his dragged shot, which was heading wide, deflected in off Lowry as he attempted to clear.

That gave Burnley the impetus and Scott Arfield looked to have given the Clarets the lead on 66 minutes but his right-footed volley hit the inside of the post and rebounded away.

"I suppose when you go 2-0 up it's a delicate scoreline and we wanted to try and get to half-time 2-0 up but the goal has gone in. It's a little bit of misfortune but the second goal was poor. We need to defend better but we didn't and we paid the price.

"We are all disappointed but the level of performance in the last three games has been very good. But for small margins and a little bit of luck and a few decisions to go our way which we haven't really been getting we are not far away."

"You can't go in every week thinking it's going to be easy just because we are top of the league and I don't think we do. We certainly didn't here. I played here and I know it's not easy.

"Their second goal sprang us into life, we couldn't get out of a fog in the first 30 minutes and then the goal brought us into life and we literally immediately, right in front of your eyes, looked full of life again like we have done all season."