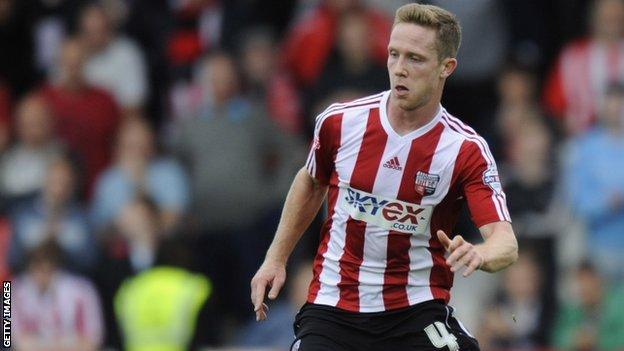 Brentford moved up to fifth in League One with a hard-fought victory at Crawley Town.

But Brentford stood firm to complete their fourth successive win.

Crawley, meanwhile, have now lost three in a row and sit 13th in the table.

"Did we deserve to win the game? Probably not, but I thought we did enough to deserve something out of the game.

"Without a piece of poor defending we probably would have come away with a nil-nil, which would not have been ideal.

"I have to say one or two people need to have a look at their mindset, in terms of what we are trying to do. They are a fantastic bunch of players who work extremely hard.

"I said before all my players have flaws. That's why they play for Crawley.

"If they didn't have a flaw they're all good players and then they would go and play for somebody else."

"I wouldn't say it was enjoyable but I think we looked solid.

"I thought we were defensively very good today, cut them down to maybe one or two chances in the second half.

"Maybe at times we could have exploited them a bit more on the counter attack.

"I think for us to keep a steady and settled team has been right and has justified better results."