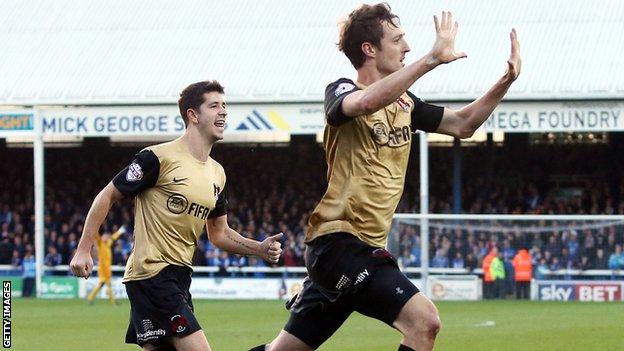 David Mooney scored a brace as Leyton Orient came from behind to win at promotion rivals Peterborough United.

Tommy Rowe touched in Grant McCann's low free-kick to give Posh the lead but Orient pulled level when Mooney's shot on the turn found the top corner.

The O's went ahead just after the break as Kevin Lisbie flicked on a long ball and Dean Cox lifted it neatly over advancing goalkeeper Bobby Olejnik.

Mooney secured the points with a low finish after being fed by Cox.

A victory for Peterborough would have moved them level on points with the League One leaders.

It was an even first half, with a volley from Mooney hitting the crossbar shortly before his equaliser and O's keeper Jamie Jones denying Rowe a second goal just before half-time.

But Orient looked much brighter after the break and could have won by a larger margin, with Olejnik saving from Cox and denying Mooney his hat-trick.

Russell Slade's side remain three points clear at the top of the table, while Peterborough are three points behind second-placed Wolves, having played a game more.

"It was obviously a very big test, a very big hurdle and obstacle for us to overcome. I thought we did that extremely well.

"David Mooney's form has been remarkable and his performance today was excellent, but it would be very difficult and unfair for me to pick out one player today.

"I thought as a team we looked very solid, very resilient and a threat going forward."

"Great credit to them, they're really going well at the moment. A team that has won that amount of games in 15 is not a fluke and we knew we're playing against a good team.

"You get days like today but no league is ever won in November so there's no panic.

"I've watched the goals back and they're awful goals to concede, you can't concede goals like that and that was disappointing.

"I would say that we haven't been playing up to the standard for four or five games now but we've been winning, not that that's ever papered over the cracks for me.

"I always analyse the performance as well as the results."