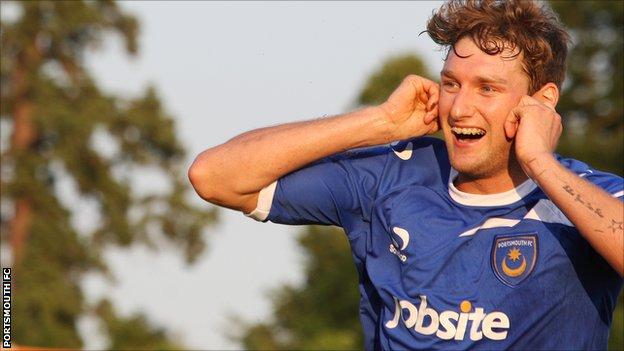 Portsmouth held off Exeter's comeback to condemn the Grecians to back-to-back defeats for the first time this season.

Pompey lacked penetration until just before the break when Ricky Holmes' lofted cross floated into the net.

Ryan Bird's header made it 2-0 straight after half-time and he repeated the trick on 71 minutes before City's Danny Coles replied with a header of his own.

"I think we deserved the three points. I think up until they scored the first one we looked like we had it in control.

"We knew they wanted to come and play football. I don't think they really hurt us too much playing that way, the only time they did was when they decided to throw it long into the box.

"I think in difficult conditions we did pass it well and we got in some good areas. We keep working on that quality to get the ball in the box and it's getting better.

"You'd hope to see a game out a little bit more comfortably than we actually did. Having said that, once they got momentum up I think we stood up, we got our heads on things, we threw our bodies in the way, we cleared things and that's what you've got to do when you face conditions and a team that keep putting it back in the box."

"We'd had an extremely good first half - with that really strong wind against us we played very, very sensibly, defended the goal and had counter attacks.

"It was us all over, and I still thought we were in with a shout even at 1-0 down at half-time."

"At 3-0 we kept going and you just don't know what's around the corner. Well done to the players who finished the game, they played on real instinct and real determination and I loved the way they played."