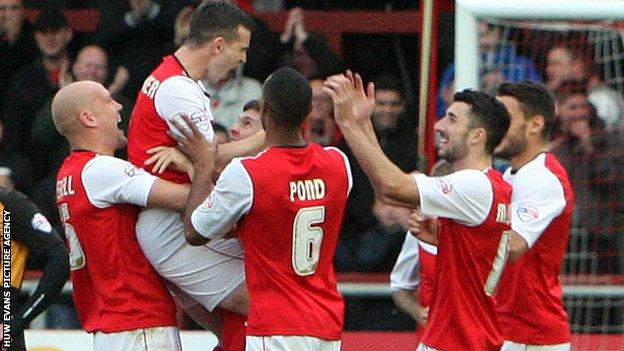 Robbie Willmott was shown a straight red card after blocking Schumacher's goal-bound shot with his hand.

Schumacher scored from the resulting spot kick before the midfielder added two further goals, including a second penalty.

Chris Zebroski scored from the penalty spot for Newport before David Ball netted a fourth for Fleetwood.

Newport County manager Justin Edinburgh told BBC Radio Wales: "I've got to be careful how I say this, but I think the man in the middle [referee Andy Haines] has stole the show from us really.

"Where do you want Robbie [Willmott] to put his arms? They're down by his side, he hasn't made an attempt [to lift them], he's just put his body across.

"We get a player booked and sent off for penalties conceded, they concede a penalty and nothing happens. Work that one out, it's very inconsistent refereeing today.

"I'm going to go and ask his explanation after this."

Shots on Target
Home13
Away5