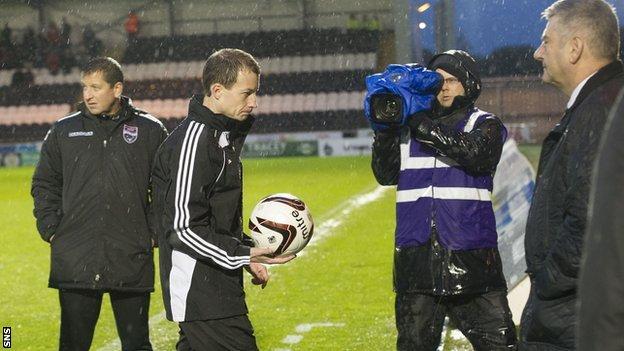 St Mirren's match against Ross County was abandoned midway through the second half due to a waterlogged pitch.

The hosts were two goals up at the break after Paul McGowan and Steven Thompson had netted.

Referee Willie Collum took the players off the park several minutes into the second period amid heavy rain.

Ground staff tried in vain to clear water from the pitch and, after a half-hour delay, it was confirmed the match would not continue.

"When we came out for the second half, the pitch had become worse than what it was before half-time," Collum told BBC Scotland.

"At half-time, things seemed to be fine, the ball was moving in the first half.

"In the second half, for the first seven minutes there was obviously a problem. There were players having to check their tackles, watch their running. The ball was sticking.

"Ultimately, the pitch was becoming unplayable and dangerous and the referee's prime responsibility is for the players' safety.

"I gave the ground staff at least two attempts to try and work hard on the pitch. They did work very hard, I'm grateful for that. However, it wasn't enough in the end.

"We deemed that it wasn't safe enough to continue the match.

"Everybody will be disappointed. However, we make the decision with only players' interests at heart and that is determining their safety. For us, the pitch was unsafe."

St Mirren chairman Stewart Gilmour was disappointed that the match could not continue.

"In my opinion we've played football in a lot worse than this," he said.