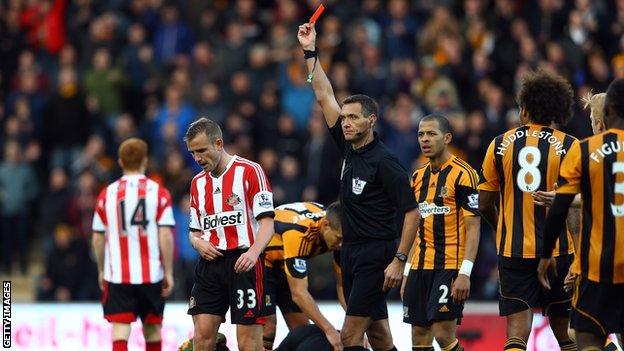 Sunderland suffered their eighth defeat in 10 Premier League games after Lee Cattermole and Andrea Dossena were sent off in the first half at Hull.

An own goal by Carlos Cuellar, under pressure from Yannick Sagbo, earned Hull manager Steve Bruce victory over his former club at the KC Stadium.

Lee Cattermole has now been sent off seven times in the Premier League:

Visiting keeper Kieren Westwood was injured before Cattermole was dismissed for a foul on Ahmed Elmohamady.

Dossena was shown a red card for a shocking challenge on David Meyler.

Gus Poyet was also fortunate not to be sent from the dug-out by Andre Marriner, the Black Cats boss escaping with a lecture from the referee after allowing his frustration to boil over as his team capitulated.

The Wearside club, five points from safety, remain second from bottom in the Premier League table - the feel-good factor from last weekend's win over Newcastle destroyed by a dreadful first 45 minutes against Hull.

Bruce's preparations for the match against the club he managed for almost two-and-a-half years before he was sacked in November 2011 were thrown into chaos less than an hour before kick-off.

The Hull boss was forced to reshuffle his plans when Nigeria international forward Sone Aluko was injured in the warm-up, and Meyler was drafted into the starting line-up against his former club.

After a quiet start, the KC Stadium erupted when Cuellar headed into his own net while under pressure from Sagbo following Liam Rosenior's 25th minute cross.

It was downhill all the way after that for Poyet and his players.

Westwood was forced off with a neck injury two minutes before half-time while challenging for the ball with Tigers defender Paul McShane, and former Arsenal goalkeeper Vito Mannone came on for his Sunderland league debut.

Then the visitors found themselves down to nine men as Cattermole and Dossena both received straight red cars in first-half stoppage time.

Cattermole's challenge on Elmohamady split the Egypt international's boot, while Meyler was fortunate not to suffer a serious injury after an ugly attempt at a tackle by former Liverpool defender Dossena.

Hull struggled to press home their two-man advantage after the interval, Jake Livermore rattling the woodwork.

But it required a fine save by Steve Harper to deny Sunderland substitute Adam Johnson an equaliser, the Hull keeper spreading his body to deny the former Manchester City player when he was clean through.

"To be fair to Sunderland they defended for their lives in the second half and we needed a second goal.

"We were helped today because it's not often you play against nine men. We've made a really decent start to the season.

"That's gone now (managing Sunderland). I've moved on and it's water under the bridge."

"Tactically it was out best 45 minutes so far (second half). We had a couple of chances and on another day that chance for Adam Johnson goes in.

"I'm proud of how my players reacted because it was a challenge after losing the goalkeeper and then having two players sent off."