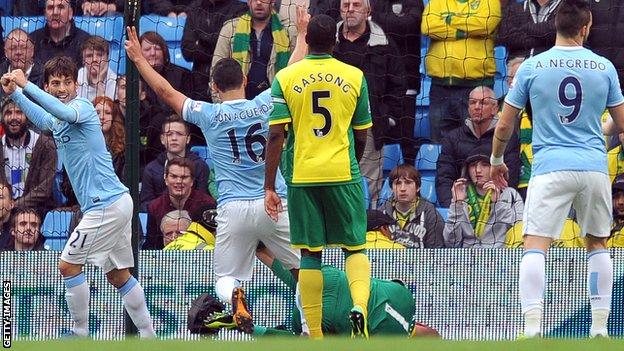 Manchester City highlighted their credentials as title contenders with an emphatic win over lacklustre Norwich.

Focus prior to the game had been on England keeper Joe Hart being dropped but once play got under way, City's attacking prowess took centre stage.

The win, City's biggest in the Premier League, moved them up to fourth in the table, while Norwich dropped into the bottom three.

If Hart could turn back time

So far this season, Hart has played nine games for City, keeping three clean sheets and conceding 11 goals. He has made 19 saves with a save to shot ratio of 63.3%

It was as impressive an attacking display from Manuel Pellegrini's side as they have produced this season as they continued their dominance on home soil this season - they have won all five Premier League games at the Etihad Stadium.

In fact, they have not lost at their own ground in the league since they were beaten 3-2 by Norwich in May.

But City's strength at home had not been the talking point in the build up to kick-off. Instead, it was the absence of Hart from the starting line-up.

The 26-year-old had started every Premier League game since making his debut for the club in April 2010, and will undoubtedly be determined to win back his place in the side as soon as possible with the 2014 World Cup in Brazil seventh months away.

However, Costel Pantilimon - Hart's replacement - will be keen to establish himself as City's number one, although he had little opportunity to make an impression against the toothless visitors.

Instead, much of the play was contested in Norwich's half and the game was effectively over when City scored four goals in 20 first-half minutes.

The first came in fortuitous fashion when Silva's initial shot was blocked and Aguero's stab at the rebound cannoned off the boot of Johnson and looped over Norwich keeper John Ruddy.

The visitors had little time to regroup from that setback as City added a second minutes later. Nasri's smart ball split open the defence and Aguero raced into the box before pulling the ball back to Silva, who beat Ruddy with a first-time shot.

The goals continued to come as City tore apart a fragile Norwich with embarrassing ease. A touch of fortune resulted in City's third as Nastasic's header from Nasri's corner deflected off Russell Martin and the fourth quickly followed.

It was a moment of real quality. Toure, an impressive presence throughout, clipped the ball through the Norwich defence for Aguero, and although there was a suggestion the Argentina striker had strayed offside, he was allowed to continue and his pass across the face of goal was tapped in by Negredo.

Slick City sink another side

Pantilimon made his first contribution of the game when he pushed Anthony Pilkington's speculative low effort wide, before City swiftly resumed their dominance as Toure's shot on the turn was held by Ruddy just before the break.

The half-time introduction of Johan Elmander and Josh Murphy revived Norwich with the former flashing a powerful volley wide from close range.

But it proved little more than a brief respite as City added a fifth when Dzeko was fouled 20 yards from goal and Toure stepped up to expertly curl the free kick over the Norwich wall and into the top-left corner of the goal.

A sixth arrived with less than 20 minutes remaining when a poor clearance by Sebastien Bassong fell kindly for Aguero, who smashed the ball into the net from the middle of the area.

There was still time for Dzeko to get his name on the scoresheet when he turned inside the area and swept the ball beyond the outstretched arm of Ruddy.