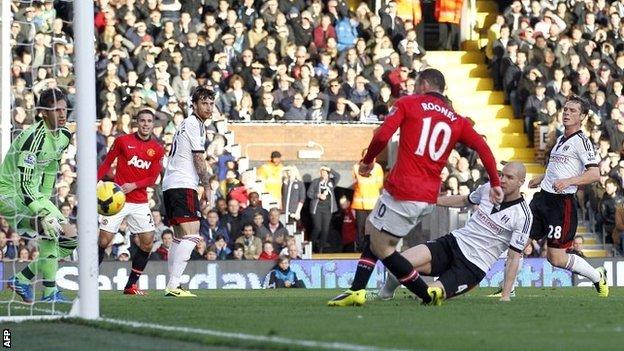 Antonio Valencia had an easy finish early on after Wayne Rooney's cutback.

Robin van Persie became the leading Dutch goalscorer in the Premier League by rifling in at the near post before Rooney tapped in after 22 minutes.

An understandably subdued home crowd were only roused late on over a confrontation between Marouane Fellaini and Sascha Riether after the Fulham defender appeared to stamp on Adnan Januzaj.

It was a miserable ending to the game after Jol had asked his team to turn Craven Cottage into a "fortress" with six of their 10 points this season coming away from home.

After losing at Championship side Leicester in the Capital One Cup this week, that vision crumbled in the first half as United easily carved open the Fulham defence, who were caught out playing a high line.

Fulham owner Shahid Kahn said before the match that he would not make any "rash" decisions regarding Jol's future yet the manner in which the London side capitulated will cause concern.

By contrast, visiting manager David Moyes will be delighted by his team's ruthlessness as they extended their unbeaten run to seven games in all competitions, with this result their fourth consecutive win.

United, who had Phil Jones and Tom Cleverley in central midfield, will rarely get as easy a first half as they did at Craven Cottage as Fulham afforded Moyes' side huge swathes of space that Van Persie wasted no time in exploiting.

The 30-year-old collected Nemanja Vidic's pass and turned before playing in Rooney, who eventually cut the ball back to Valencia for his first league goal since 17 April.

Fulham, whose only home league win of the campaign came against Stoke last time out, looked like they had survived the early onslaught when the industrious Scott Parker played a delightful ball through to Dimitar Berbatov on 19 minutes, but Rafael nipped in to tackle the former Manchester United player as he shaped to shoot.

Within a minute, United went further ahead - although there were suggestions of offside as Januzaj dispossessed Parker and played in Van Persie, who fired high into the goal to overtake Jimmy Floyd Hasselbaink's Dutch record of 127 Premier League goals.

Rooney's finish, two minutes later, also came as the Fulham defence pushed up. Unfortunately Riether was a yard behind his fellow defenders, playing Van Persie onside, and this time the former Arsenal forward squared the ball to Rooney for a simple finish.

The hosts looked understandably dumbfounded, and boos began to be heard around the ground. Berbatov's tame shot after more good work by Parker was symptomatic of a first half in which Fulham struggled to offer any meaningful threat.

Moyes was forced into making a triple substitution at half-time as Rafael, Jonny Evans and Tom Cleverley went off injured but although Pajtim Kasami's off-target shot led to an improved spell by Fulham, the visitors generally retained control.

When Jol's side did score after 65 minutes, they had a helping hand from Rooney as substitute Kacaniklic cut inside and had his shot from the edge of the box diverted into the bottom corner four minutes after coming on.

That inspired some confidence in the hosts but, although they caused United further moments of worry when substitute Bent headed onto the bar from Berbatov's cross and Kieran Richardson headed wide, United finished the game comfortably before the late fracas.