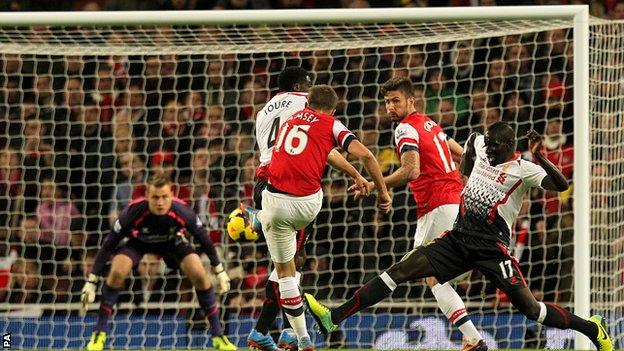 Arsenal extended their lead at the top of the Premier League to five points with victory over Liverpool at Emirates Stadium.

This game began as a meeting between the top two sides in the table and Arsenal showed resilience and quality to maintain their fine start to the season and stretch their advantage after Chelsea's surprise loss at Newcastle United.

Santi Cazorla gave Arsenal the lead with a fine first-half strike after his header struck the post and Aaron Ramsey scored his 10th goal of this campaign with a spectacular long-range effort on the hour.

Luis Suarez hit the post for Liverpool late on but this was an impressive victory for manager Arsene Wenger's side as they recovered from the midweek Capital One Cup home defeat by Chelsea.

The result will be a bitter disappointment for Liverpool manager Brendan Rodgers after they travelled to north London with optimism high after an excellent start to the season - but perhaps saw their own current status put into perspective by this defeat.

Cazorla and Ramsey will claim much of the credit with the goals that gave Arsenal the three points, but captain Mikel Arteta gave a midfield masterclass in which he overshadowed his Liverpool counterparts to set the platform for a vital win.

Liverpool suffered a setback prior to kick-off when England defender Glen Johnson was ruled out through illness. It gave an opportunity to local youngster Jon Flanagan, who had not made a Premier League start since April 2012.

Arsenal were without the injured Jack Wilshere but there was still more than enough ability on display in both sides to make the first 45 minutes a thrilling spectacle.

Liverpool goalkeeper Simon Mignolet was in early action to save from Tomas Rosicky, while Jordan Henderson appeared to surprise himself with the way he was able to weave through Arsenal's defence unchallenged and shot tamely at Wojciech Szczesny.

Arsenal, arguably against the run of play, took the lead after 19 minutes with a goal that was a tribute to Cazorla's balance and technique. He recovered his position brilliantly to volley past Mignolet after hitting the woodwork with a header.

Liverpool then felt they were denied an equaliser by referee Martin Atkinson when Jordan Henderson tapped in Daniel Sturridge's pass after Suarez, who had been hauled down by Bacary Sagna, had taken a quick free-kick, apparently too quickly for Atkinson's liking.

Cazorla and Ramsey both tested Mignolet before the interval and Liverpool's uncertainty at the back persuaded Rodgers to take off Aly Cissokho, who had toiled desperately, and replace him with fit-again Philippe Coutinho at half-time.

It was Arsenal who created the moments of danger as Olivier Giroud failed to profit from ex-Gunners defender Kolo Toure's misplaced pass, then poked a shot straight at the keeper.

There was no mistake with Arsenal's second after 59 minutes. Ramsey made Liverpool pay for offering up time and space 25 yards out by finishing spectacularly high past Mignolet with the outside of his right foot.

Suarez had not been at his brilliant best but his threat was ever present, and he flashed a warning to Arsenal that this game was not done yet as he swerved an angled effort against the post with Szczesny beaten.

Arsenal were in control as the game drew to a close but were almost punished for a lack of concentration by Szczesny, who was so fortunate when his poor clearance struck Sturridge but bounced straight back into his arms.

Suarez then broke through seconds later but sent his finish wide of the target, a poor effort for a player of such high calibre.

Mesut Ozil almost added a third as Arsenal ended in comfort. And this was a performance that will have increased Wenger and Arsenal's confidence that they can maintain a serious challenge this season.