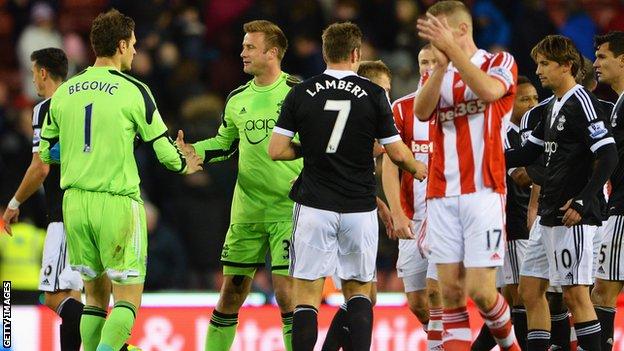 Steven Nzonzi wasted a late chance for Stoke when he fluffed his shot.

On paper the game had looked destined to be a tight one. Stoke had only conceded four goals in their past six home league games, while Southampton arrived at the Britannia with the best defensive record in the Premier League.

So a goal after 13 seconds played rather against expectations - and nobody could have predicted the bizarre manner of its arrival.

With the strong wind behind him, Begovic - whose first club in England was Saints' bitter rivals Portsmouth - punted a long ball forward from his own area.

The ball looked set to be easily collected by Boruc, but the bounce caught the Southampton goalkeeper out and it cleared him before finding the net.

Begovic looked just as embarrassed as Boruc when his Stoke team-mates raced back to celebrate a goal that narrowly failed to dislodge Spurs defender Ledley King's effort after 10 seconds against Bradford in 2000 as the fastest Premier League goal.

The official distance of the goal was later put at 97.5 yards.

The Potters should have been two ahead soon after but this time it was home defender Ryan Shawcross who was left red faced.

Peter Crouch flicked a corner into the path of Shawcross but the former Manchester United player mis-hit his attempt from the edge of the six-yard box.

With the game being played at a blistering pace, Dejan Lovren came close to pulling Mauricio Pochettino's side level but he headed wide after finding space at a corner.

As the half progressed, the visitors started to find their way in the game and produce the attractive fast-paced football that has served them so well this season.

This time last season Southampton were second from bottom but, 12 months on, they arrived on the back of four wins from five games and an impressive draw at Manchester United the only dropped points in that period.

They got their equaliser just before the break when some neat play gave Ward-Prowse space on the right to send over a looping cross.

The ball hung in the air for Rodriguez before the Saints striker cleverly headed into the ground and over Begovic.

After the break, Boruc was in early action again, the Saints keeper having to be alert to deny Mark Arnautovic after the Stoke midfielder lashed an effort goalwards.

Nzonzi then carelessly gave away a free-kick on the edge of the area that Ward-Prowse curled onto the roof of the net as Southampton pushed forward.

The Stoke midfielder also had a late chance of his own before Saints had claims for a penalty turned down when Shawcross appeared to handle the ball in the area.

Pochettino's side had to settle for a point that extends their unbeaten league run to seven games.

You can see a selection of photos from today's matcheson the BBC Sport Facebook page.