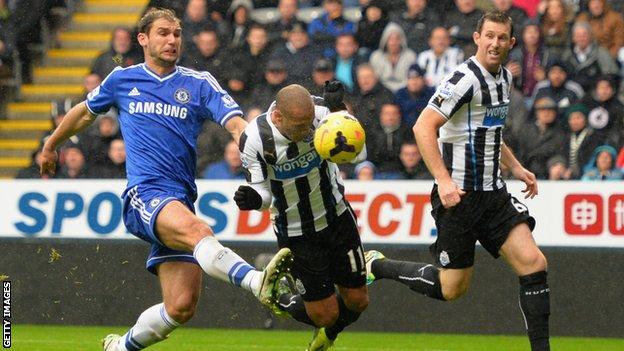 Chelsea, on the back of six straight wins, edged the first half as John Terry hit the bar and had a header cleared off the line.

However, the Magpies dominated after the break and went ahead when Gouffran headed home Yohan Cabaye's free-kick.

Victory was sealed when Remy curled in a shot from Vurnon Anita's pass.

And while it may still take supporters some time to forget last weekend's defeat against rivals Sunderland, this result gives more promise of steady progression following the draw against Liverpool and victory at Cardiff which preceded that derby day dejection.

Their victory over Chelsea, who started the day second in the Premier League, was built on a disciplined defensive display and a powerful second-half performance which overwhelmed their below-par visitors.

Chelsea playmakers Juan Mata, Oscar and Eden Hazard were not given room to dictate play, meaning Fernando Torres was starved of the service which helped him earn such praise in the aftermath of last weekend's victory over Manchester City.

Newcastle kept their shape well, limiting Chelsea to just two chances in a fairly subdued first half - both of them from set-pieces.

First John Terry nipped in front of Mike Williamson to head Mata's corner against the bar before Davide Santon stooped to head the former England skipper's goal-bound header off the line.

Chelsea might have been dominating possession and pressing Newcastle back when they did lose the ball, but they lacked the penetration to break down their resolute hosts.

It also served to offer Newcastle encouragement, and the home side gradually seized control after the break - Chelsea keeper Petr Cech having to be alert to deny Moussa Sissoko and Gouffran.

The pressure finally told in the 68th minute when Gouffran nipped in front of Branislav Ivanovic to head home Yohan Cabaye's free-kick.

It appeared Alan Pardew had instructed Cabaye to put the free-kick where he did, and the Newcastle manager was certainly getting the better of Mourinho in this particular tactical battle.

Samuel Eto'o, Willian and Andre Schurrle were all introduced from the bench by the Chelsea boss, and Eto'o appealed for a penalty when his shot was deflected wide via Mapou Yanga-Mbiwa's hand.

Willian also had a shot saved while Eto'o's follow-up was blocked by Mathieu Debuchy.

The game looked up for Chelsea when Eden Hazard dragged a shot wide from 12 yards out and so it proved as Remy scored his sixth goal of the season via the inside of the post.

It sealed a superb performance by the hosts, who move up to ninth in the Premier League, while Mourinho, who has never won at St James' Park, saw his side stay second after Liverpool's loss at Arsenal.