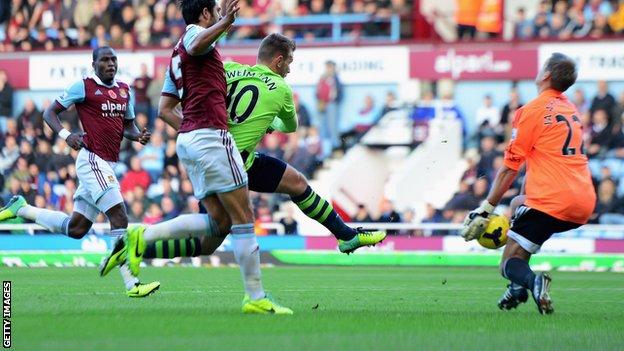 West Ham ended a run of three home Premier League defeats as they were held to a goalless draw by Aston Villa.

Christian Benteke came closest to scoring for the visitors when he headed Matthew Lowton's deep cross against the crossbar from six yards out.

Jack Collison shot wide from a quickly-taken free-kick for the hosts and Stewart Downing and substitute Joe Cole both had shots saved by Brad Guzan.

But a draw was a fair result as both sides struggled to create chances.

Aston Villa have now failed to score a Premier League goal in six hours and 15 minutes, and this result leaves them 13th, only three points above the bottom three.

But of greater concern to Villa boss Paul Lambert will be the hamstring injury sustained by Andreas Weimann, who limped off early in the second half after he had been his side's most dangerous player.

West Ham, one place below Villa in the league table, also have attacking problems of their own and their failure to score was their sixth blank in 10 Premier League games.

Despite seeing more possession, especially down the wings through Matt Jarvis on the left and Downing on the right, the Hammers frustrated the fans at Upton Park with the final delivery often being disappointing.

With Andy Carroll still two weeks away from a return to training and Carlton Cole lacking match practice after he re-signed for the club, West Ham looked short of ideas up front as they started without a recognised centre-forward for the fourth successive Premier League game.

Nine of the 18 Premier League matches between West Ham and Aston Villa at Upton Park have ended in draws.

Aston Villa, operating in a 3-5-2 formation, were sitting deep and struggled to provide service for Benteke, but were still a threat on the counter-attack.

After six minutes, Weimann raced on to a long ball but Jussi Jaaskelainen was well positioned to block the Austrian's shot.

England winger Downing, who spent two seasons at Aston Villa, is yet to score for the Hammers following a £5m move from Liverpool in the summer and had the first clear opportunity for the hosts, but shot at Guzan from 20 yards.

But West Ham were nearly caught out when, from their own corner, Villa counter-attacked.

Weimann was through on goal but Ravel Morrison, the last home player back, recovered and referee Howard Webb decided the Hammers midfielder won the ball cleanly on the edge of the penalty area.

West Ham looked more likely to score after the restart but Morrison's 20-yard effort was well blocked by Villa defender Nathan Baker, with Kevin Nolan firing the rebound over.

Substitute Joe Cole shot straight at Guzan, before Benteke nearly won the points for Villa with his first opportunity but powered a header against the bar.

"After three home defeats on the trot it was very important we didn't lose.

"We tried to win it but we didn't find the quality to put the ball into the net. We delivered 38 balls into the box, but it's a spell we are having where we can't find the net.

"In the last two home games we have conceded three in both so it was vital to get back to keeping clean sheets.

"There's only one thing missing, and that's scoring a goal or two, but we are only a small margin away from being a three-point team instead of a one-point team."

"On balance we had the best clear-cut chances, with Christian hitting the bar and Andreas going through.

"It was always going to be hard here and it was a difficult, physical game, but we competed brilliantly.

"Our counter-attacking is a threat and I'm delighted with the lads' attitude and I thought our resilience was excellent."

To see a selection of photos from today's matches, visit the BBC Sport Facebook page.