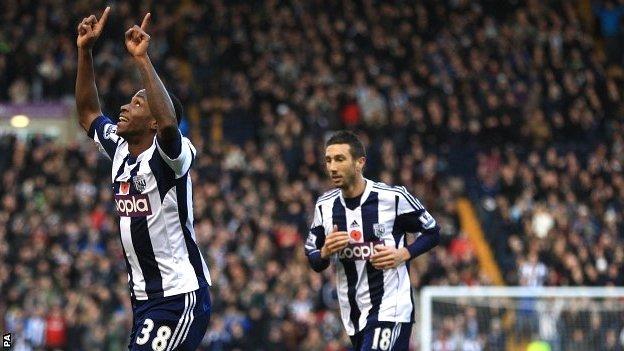 West Brom condemned Crystal Palace to a seventh successive league defeat as they withstood the visitors' second-half revival at the Hawthorns.

Gareth McAuley headed in to snuff out the visitors' hopes, before Boaz Myhill denied Yannick Bolasie late on.

The Eagles, bottom of the table, have lost all but one of their 10 Premier League games this season and are six points from safety.

But hat partnership did not have the chance to flourish any further, with Guedioura carried off after an initially innocuous-looking clash with Myhill shortly after.

West Brom made an early change of their own, introducing Berahino in place of the injured Billy Jones on the half-hour, but they struggled to make an impression on their industrious, but limited opponents for much of the first half.

Instead, Guedioura's replacement Jason Puncheon dragged their best chance wide before Berahino registered his sixth goal of the season.

The England Under-21 international collected Sessegnon's square ball just inside the Palace box before sweeping the ball round defender Dean Moxey and into the bottom corner.

West Brom had been unbeaten in five league games before last week's defeat by Liverpool - a run that included a victory at Manchester United and a draw at home to Arsenal - and their confidence returned with the lead.

Only a crucial touch from Eagles defender Joel Ward diverted Morgan Amalfitano's cross away from a lurking Shane Long before Sessegnon failed to make a clean connection as the defence parted invitingly in front of him.

The Baggies almost paid for that wastefulness as Jedinak contrived to head wide when unchallenged eight yards from goal, before Chamakh sent the ball past an advancing Myhill when trying to control it, but the inadvertent effort at goal was off target.

But McAuley barrelled in at the back post to settle the home fans' increasing nerves with a fine header.

Palace finished strongly with Bolassie, Damien Delaney and Jerome Thomas all going close but it was too little, too late as their chastening campaign continues.

West Brom manager Steve Clarke: "We are in negotiations with Saido's representatives and if I was the club, I would get it done as soon as possible.

"For Saido, the most important thing is that he continues to develop as a player.

"That is what I am trying to do with him here and I think he is happy to work with me along those lines.

"My own personal opinion is that he is not quite ready for full international football."

Crystal Palace caretaker manager Keith Millen: "It is not an easy situation, with all the speculation about when the manager is going to come in and who it will be.

"The players have been focused - I don't think you can accuse them of not concentrating on the job in hand. But it is a tough time for everyone at the club really.

"The chairman is not going to rush into it. He needs to appoint the right person.

"But I think the sooner someone does come in, the better - then there will be new ideas, a fresh voice and hopefully a little bit of luck."

You can see a selection of photos from today's matches on the BBC Sport Facebook page.