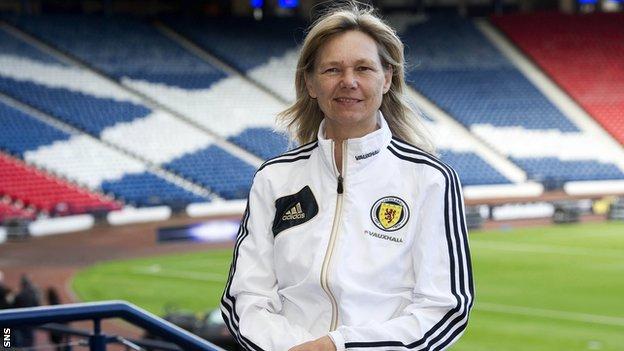 Scotland's Anna Signeul has expressed surprise at being named on Fifa's shortlist for women's world coach of the year.

Signeul has led Scotland to an all-time high of 20th in the world rankings and twice steered them to the play-offs in European Championships.

"That was a surprise, the players told me about it (the nomination) at training," she told BBC Sportsound.

"It's confirmation of what good works is being done here in Scotland."

I'm delighted for everyone who is working so hard

Also named on the 10-strong shortlist is former Scotland Women Under-19 coach Shelley Kerr, currently in charge of Arsenal Ladies.

They face strong competition from Ralf Kellerman, who led German side Wolfsburg to the Champions League title, Silvia Neid, head coach of recently crowned European Champions Germany, and Signuel's fellow countrywoman Pia Sundhage, who is in charge of the Swedish national team.

Signeul, who was appointed Scotland coach in January 2005 and made more than 240 appearances as a player in the Swedish women's Premier League, said the nomination recognised the efforts by everyone connected with the national side.

"I'm delighted for everyone who is working so hard and the players," she said ahead of Saturday's World Cup qualifier against Northern Ireland at Fir Park.

"We really feel prepared for the game and it's not a given who is going to start (for Scotland) - competition is crucial for good performances."