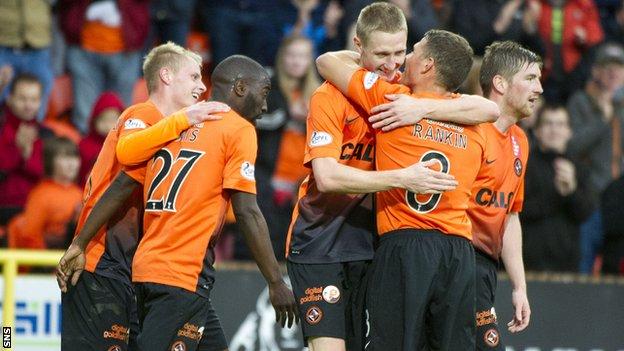 Manager Jackie McNamara was purring with satisfaction after to move up to fifth in the Scottish Premiership.

"First half was as good as we've played," enthused McNamara on BBC Radio Scotland. "I thought we were great right from the start.

"To be hyper-critical, it could have been a lot more than 2-0 at half-time - we had so many chances."

Nadir Ciftci netted twice in the first-half, taking the Turkish striker's tally for the season to seven goals.

"He has settled in well," McNamara said of the summer signing.

"He's getting better and better. He has so many attributes; his strength, awareness and finishing."

Ryan Gauld was also on target and one of three teenagers on show for the home side.

"Gauld had a couple of chances in the first half and was a bit unfortunate but his finish was fantastic," added McNamara.

"He is great to watch, with his ability and his vision.

"[John] Souttar is great coming out with the ball from the back and [Andrew] Robertson has been a revelation since he came here."

And the manager joked that it would be difficult to pick his team for Tuesday's Scottish League Cup quarter-final away to Inverness Caledonian Thistle.

"It's important that we use the squad properly - we have a big game on Tuesday and we're away to Celtic on Saturday," he explained.

"I said to [assistant coaches] Darren [Jackson] and Simon [Donnelly] 'good luck picking the team after that'.

"We're only allowed four outfield substitutes for that one as well. But these are good problems to have."