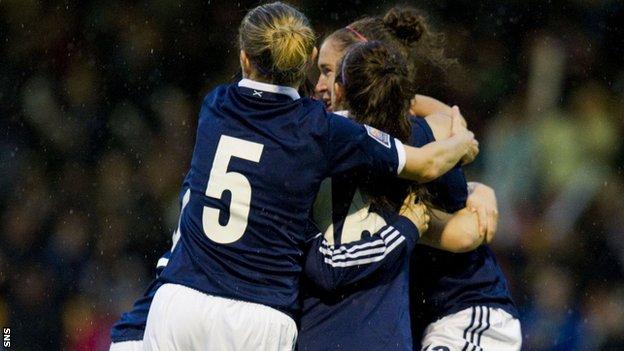 A kicking error from visiting goalkeeper Emma Higgins presented Ross with the chance to run through and score after three minutes.

Thereafter, Higgins was exceptional as she bravely denied the Scots on a number of occasions.

But Higgins was finally beaten for a second time as Jennifer Beattie settled the victory with a fine low finish.

Scotland remain top of Group 4 with a 100% record after three matches but the hosts did not enjoy the same kind of attacking freedom that resulted in high-scoring victories over Faroe Islands and Bosnia.

Fans at a rain-lashed Fir Park may have been expecting another rout following the opener from Ross, who netted her 19th international goal.

A terrible kick out from Higgins was cushioned into Ross's path by Kim Little and the striker evaded a sliding challenge before clipping a low finish under the goalkeeper.

Scotland enjoyed lots of possession but were guilty of too many aimless balls forward on the slick surface.

Aimee Mackin was a threat on the break for Northern Ireland in the first half and Sarah McFadden was close to finding an equaliser when her 43rd-minute header flew narrowly over the crossbar.

The Scots improved their use of the ball in the second half as the visitors, playing their first game of the campaign, tired and the rain eased up.

Higgins made a super fingertip save to keep out an errant delivery from Frankie Brown that threatened to dip under the crossbar.

Rachael Corsie then ballooned a shot high over from a promising position before Higgins made a good sliding save to deny Ross.

With 12 minutes remaining, Beattie did well to stretch and arrow a low shot past Higgins from 15 yards as the ball bounced loose from a corner.

Higgins was in the wars in the closing stages, taking a knock to the face as she raced out of her penalty area to made a brave tackle and the goalkeeper was given another thump as she kept out an awkward cross under pressure from a blue-shirted opponent.

Scotland go to Poland on Thursday, with coach Anna Signuel unlikely to make too many changes to a winning side.