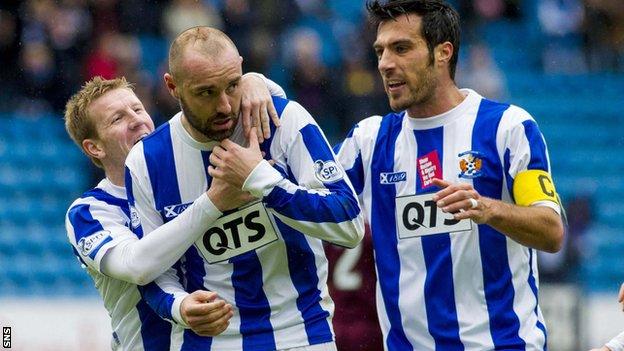 Kilmarnock manager Allan Johnston has added weight to the calls for an "exceptional" Kris Boyd to get another Scotland call-up.

Boyd's brace was enough to see off Hearts at Rugby Park and Scotland have two November friendlies against the USA and Norway.

"It's the hardest thing to do, isn't it, score goals," said Johnston.

"He does it consistently so there won't be many other people who can score as many goals as he can."

Former Rangers striker Boyd's goals ensured Killie made it two wins on the trot and they moved up to 10th in the Scottish Premiership.

His first at Rugby Park was a lesson in how to stay cool and finish clinically, whereas the 30-year-old showed a great touch to finish his second.

"His all round play, when he plays like that he's unplayable," Johnston said.

"It's his work rate as well. You see in the very last five minutes of the game he's working back to win the ball back for the team.

"And when he plays like that he's impossible to play against.

"It's even good for our younger players coming through, working alongside his quality of finishes in training - they can learn from him."

Kilmarnock were positive in their play and were boosted by the creativity on the wings by Chris Johnston and Michael Gardyne.

Jackson Irvine was composed in midfield and sprayed a variety of clever passes on the slick turf.

"It's more than just two strikers, it's the whole team," added Johnston, who only won his first game as Killie boss last week.

"Everybody did really well today, we created a lot of chances and thoroughly deserved our win.

"We've had a lot of good performances this season without getting the result.

"Today was a good performance and a good result. So hopefully that kick-starts our season."

One worry for the hosts was the first-half departure of defender Darren Barr due to a head injury, and Johnston faces a wait over the seriousness of that knock.