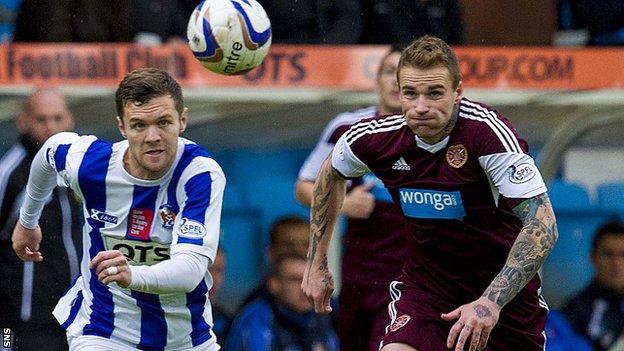 Hearts manager Gary Locke is anxious about an injury Ryan Stevenson sustained in the 2-0 loss to Kilmarnock at Rugby Park.

The forward was substituted in the first-half after being tackled when trying to engineer a shot on goal.

"It's the same knee as what he did earlier in the season," said Locke.

"It looks like a bad one. We're in again tomorrow morning so we'll assess him again after 24 hours but it certainly doesn't look too good."

That problem could compound a disappointing defeat for Locke's inexperienced Hearts side, who were victim to two clinical Kris Boyd finishes.

The Tynecastle side remain on minus seven points in the Scottish Premiership, 15 points behind St Mirren in 11th.

"We are back to square one, that's the bottom line," said Locke.

"We're back to where we started. That's the first set of games gone but we certainly need to do better.

"The two goals we gave away today were so cheap it wasn't true.

"If we're going to give ourselves any chance in games we'll have to stop leaking goals like that.

"You can't give a player like Kris Boyd those types of chances because he'll put them away."

Locke's attentions will now turn to a game where points do not matter - a League Cup quarter-final tie against Edinburgh rivals Hibernian on Wednesday.