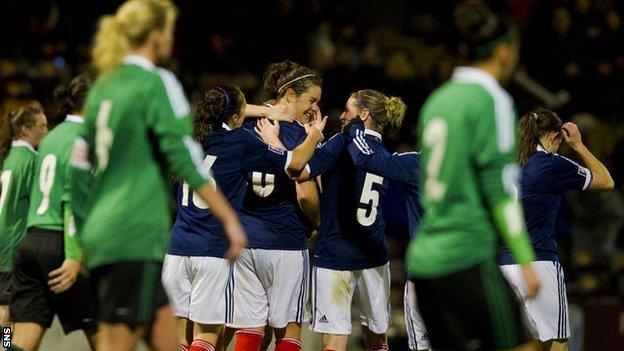 Scotland head coach Anna Signeul said she was "frustrated but happy" after the 2-0 World Cup qualifying win over Northern Ireland at Firk Park.

Jane Ross scored after just three minutes, but the avalanche of goals they enjoyed against Faroe Islands and Bosnia-Herzegovina never arrived.

Jennifer Beattie's second half strike sealed the three points, but Signeul felt her side lacked their usual spark.

"It was too slow," said Signeul. "We didn't get any fluency in our game."

Scotland remain top of Group 4 with a 100% record after three matches, and travel to face Poland on Thursday.

We will rest on Sunday, go to Poland on Monday, and try and get the energy back ahead of Thursday's game

With the Scottish season running since March, Signeul suggested her players are suffering from fatigue.

She told BBC Scotland: "I think we are going to rest. It looked like we were a little bit tired.

"I said at the beginning of the week that I thought in training we looked a little bit tired with it being the end of the season.

"We will rest on Sunday, go to Poland on Monday, and try and get the energy back ahead of Thursday's game."

Sweden remain the favourites in the group despite only managing a 1-0 victory over a Bosnian side Scotland put seven goals past last month, but for now Signuel is only concentrating on Poland.

"Every game we play now will get tougher and tougher, and Poland is going to be the toughest of the four games we play so far," said Signeul.

Beattie hit her 19th goal for Scotland, but admitted the Scots found it difficult to break down the Northern Irish.

She said: "Even though we were 1-0 up we weren't best pleased with our attacking performance, so we knew we could up that in the second half.

"We just needed to find a bit more composure, but credit to Northern Ireland, that was their job, making it very difficult for us."