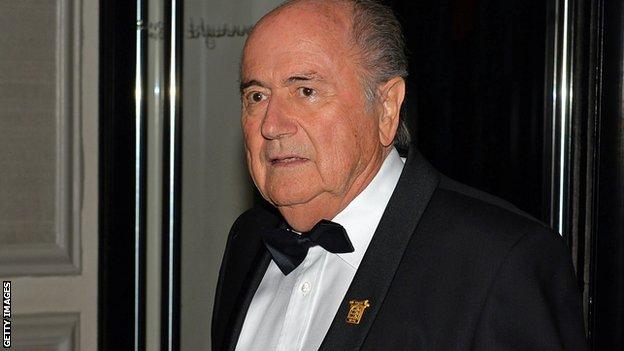 Fifa president Sepp Blatter says football's world governing body will "have failed" if it does not adopt a zero tolerance approach to racism.

Uefa opened a disciplinary case against CSKA Moscow this week after Manchester City's Yaya Toure complained of being racially abused by their fans.

Blatter said: "If we are not able to go zero tolerance, we have failed."

Fifa's Jerome Valcke will meet Russia's World Cup 2018 officials in the next 48 hours to discuss the issue.

A new anti-racism resolution passed by Fifa in May means teams can now be forced to play matches behind closed doors as punishment for incidents of racism, with stiffer penalties in place for repeat offenders.

"In the first case there should be a warning, in a second case sanctions, disciplinary sanctions or to play without spectators," said Blatter, 77, who has been Fifa's president since 1998.

"But the third one is that you have to deduct points or expel a team from a competition.

"The [Fifa] congress has said we have to go zero tolerance. The congress was standing, there was not one voice against that.

"Everybody wants it to happen. Now we have to apply it and have to have the courage to have to do it."

Blatter called for the zero tolerance approach at a news conference in London, saying he had spoken to Uefa president Michel Platini at the Football Association's 150th anniversary dinner about the need for football's disciplinary committees to apply existing tougher sanctions.

Blatter said implementing the new measures was not Platini's problem and instead an issue on which national associations must be strong.

Toure made his complaint about discrimination in midweek, despite CSKA's denial of any wrongdoing by supporters.

But the Fifa president insisted that even if racism remains a problem in Russia, moving the World Cup from the country was "impossible."

Fifa general secretary Valcke will meet with Alexey Sorokin, chief executive office of the 2018 World Cup, to discuss the stance towards discrimination on Monday.