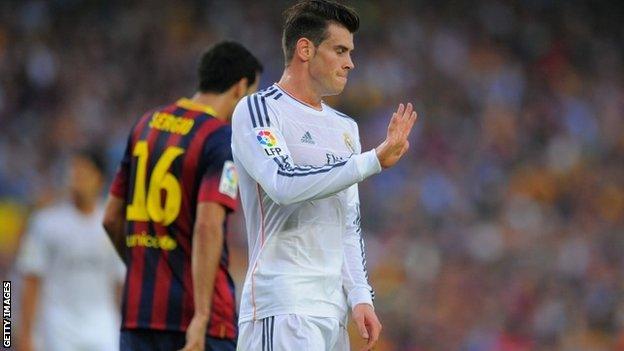 The 24-year-old winger began the game in an unfamiliar position as a striker in what was only his second start of an injury-hit season.

The £85m summer signing was replaced by Karim Benzema after an hour.

Ancelotti said: "He played well and needs to look for his team-mates' runs. He didn't play badly during that hour."

Bale joined Real from Tottenham for a world record fee in the summer but foot and thigh injuries have restricted his playing time.

Ancelotti added: "I think they are his first matches and he needs to get used to playing with his team-mates, which is normal.

"It doesn't make much difference for him to play on the right or in the middle. We started like that to put more pressure on Sergio Busquets, but after 20 minutes I changed his position to the wing to give him more room."

Former Chelsea boss Ancelotti, who was experiencing his first Clasico, was adamant that Real should have been awarded a penalty when forward Cristiano Ronaldo went down under the challenge of defender Javier Mascherano with 20 minutes remaining.

"Naturally the penalty was very clear for me. I think everyone saw it. The only person that didn't see it was the referee," he said.

"I played him there to look for balance in the middle of the park. I asked him about it before and he said he wanted to play there, so I put him in," continued the 54-year-old.

"I didn't play defensively - [Luka] Modric isn't a defensive midfielder, and Marcelo, [Dani] Carvajal and Cristiano and [Angel] Di Maria are attackers. Barca did not play with any more attackers than we did."

The ex Paris St-Germain manager said he was pleased with the performance of his team despite the result.

"It's a fantastic game and atmosphere. I think it was a good game, and we showed we can play well against a fantastic team," he added.

"Of course you want to win this kind of game but at the moment we are improving and this game proves that."