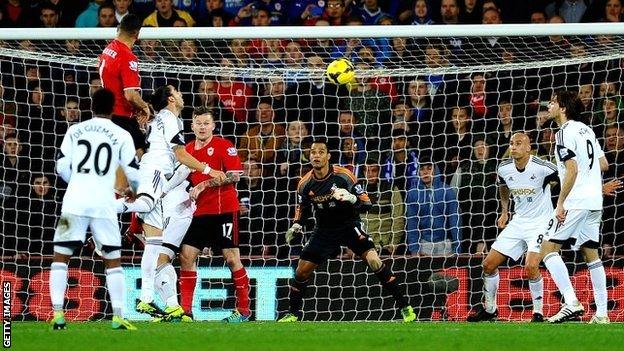 It was the moment that finally ignited the passions surrounding the 106th meeting of these two old rivals and gave Bluebirds manager Malky Mackay the win he will have craved as uncertainty continues to surround his future.

Swansea's misery was complete when Vorm was sent off by referee Mike Dean in stoppage time for flattening Cardiff substitute Fraizer Campbell as he went around him - leaving defender Angel Rangel to take the gloves because Michael Laudrup had used up all of his substitutions.

The three points will be especially sweet for Mackay as speculation mounts about his relationship with Cardiff owner Vincent Tan, but days like this will send his stock soaring even higher as his name echoed around the stadium in the closing moments.

And it was a performance of organisation that must surely suggest to Tan he would find it difficult to find anyone who could currently better the job being done by the 41-year-old Scot.

Swansea dominated possession for spells without hurting the fiercely-committed Cardiff defence, apart from one early opportunity squandered with uncharacteristic wastefulness by Michu.

Goals hard to come by

It is 17 years since a south Wales derby was decided by more than a one-goal difference. In 1996 Swansea beat Cardiff 3-1 in the Football League Division Three.

Indeed, until Caulker broke the deadlock, there was a decidedly low-key feel to a fixture noted for the hostility between supporters separated by 40 miles and proud allegiances to their respective clubs.

Swansea manager Laudrup, who stayed in his seat throughout as opposite number Mackay spent 90 minutes cajoling his players from the technical area, will be bitterly disappointed at his team's failure to transform spells of superiority into anything resembling serious pressure.

Around 60 coaches travelled from Swansea into Cardiff under tight security for this derby, but the opening 45 minutes bordered on the civilised on the pitch - a couple of thunderous challenges from Jonjo Shelvey apart.

Swansea were more at ease in possession early on and should have taken the lead when Michu demonstrated superb technique to bring Shelvey's right wing cross under control to create space, only to shoot over the top.

Cardiff, in contrast, struggled to impose themselves but improved markedly as the half went on. They raised the hopes of their supporters when Bellamy's free-kick glanced off Leon Britton but was just off target.

Swansea were not adding any serious end product to their pretty passing patterns and paid the price as Cardiff went ahead just after the hour, Caulker causing an eruption of noise inside the stadium as he headed home.

It forced Laudrup into action. Michu had been hobbling and was waiting to be replaced by Alvaro Vazquez - but it was £12m striker Wilfried Bony who replaced the injured Spaniard.

Cardiff keeper David Marshall had been well protected but needed to produce the goods as the clock ticked down, pushing away Jonathan De Guzman's free-kick before showing great athleticism to keep out substitute Alejandro Pozuelo's shot.

The final indignity for Swansea came with Vorm's dismissal - and how Cardiff and their supporters celebrated at the final whistle.