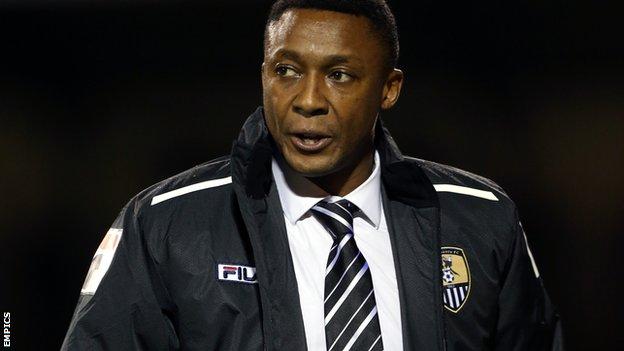 Chris Kiwomya has parted company with Notts County after eight months as manager of the League One side.

Kiwomya, 43, took temporary charge of the side in February after the departure of Keith Curle and was given a three-year contract in March.

After a year in charge of the Magpies' development squad, former Ipswich Town, Arsenal and Queens Park Rangers striker Kiwomya was promoted to the manager's position at Meadow Lane, losing just once in his first eight games on the way to a 12th place finish.

Despite taking Liverpool to extra-time in a 4-2 League Cup defeat at Anfield in August, Notts have struggled for league form and Kiwomya held talks with the club's chief executive Jim Rodwell after Saturday's loss, their third successive defeat.

"I cannot express how difficult a decision that this has been for the board of directors," explained Rodwell, whose side sit five points from safety.

Kiwomya's clubs as a player

"This has been a gruelling year for Chris, both on the pitch and personally. Chris has conducted himself with dignity and professionalism throughout.

"We put our faith in Chris towards the end of last season and thought we had found the man to bring stability and a long-term vision to the manager's role here at Notts.

"However, it simply hasn't worked out how we had envisaged and unfortunately, as we all know, this is a results driven business and there has to be a line that we simply cannot cross."

Former Nottingham Forest and England midfielder Hodge will take charge of the side for Tuesday night's league visit of Oldham Athletic.