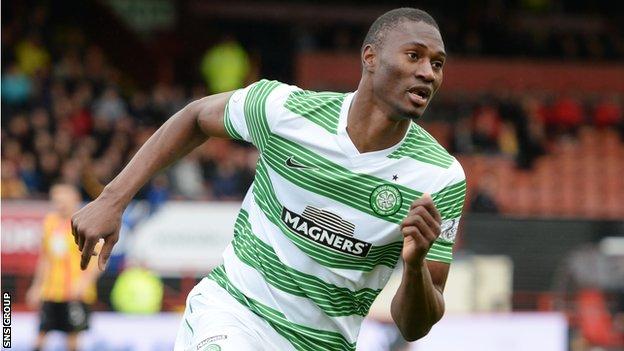 Manager Neil Lennon says Amido Balde has a big part to play for Celtic after the striker came off the bench to hit the winner at Partick Thistle.

The 22-year-old Portuguese has made just one start since his summer arrival from Vitoria Guimaraes.

"We know where is he in terms of his development," said Lennon after the 2-1 win. "He's had to be patient but you can see the attributes that he has.

"He is going to play a lot more as the season progresses."

Balde demonstrated great pace and composure to break forward from the near the halfway line and roll a shot past Thistle keeper Scott Fox.

The striker has now scored twice in the Scottish Premiership as a substitute.

"He's still got a bit of work to do in terms of his hold up play," added Lennon. "But he's definitely got goals in him and he gives us a different dimension."

Celtic ended the game with 10 men, with Georgios Samaras going off injured when the visitors had used all of their substitutes.

Emilio Izaguirre was one the players replaced, with the full-back suffering a head knock.

"Izaguirre has got a bit of concussion," explained Lennon. "He got a bang to the head making a fantastic block at a crucial time in the game.

"He can't remember his run and shot that he put over the bar - but I quickly reminded him of it.

"Hopefully, he'll be okay after a couple of days' rest. He might be a doubt for the weekend.

"Sammy has a deep gash on his knee and he might be a doubt as well.

"We are patched up at the moment but hopefully Charlie Mulgrew, Derk Boerrigter and James Forrest will be back soon.

"We missed a bit of width today and those three coming back will give us more dynamism going forward."

Lennon is pleased that Celtic remain unbeaten in the Premiership after 10 games but thought his side should have made more of a dominant spell after Samaras had headed them in front before the interval.

"We had to dig it out in the end," he said. "We were sloppy at times in our finishing.

"We should have been out of sight at half-time. Scott Fox has made three great one-on-one saves.

"At 1-0 Partick Thistle are always in the game and they are a good team.

"We didn't start the second half at all well and for 15 minutes we were on the back foot.

"But our reaction to conceding was good. It is a brilliant win for us.

"It's not always going to be champagne football and you've got to give respect to the opposition."