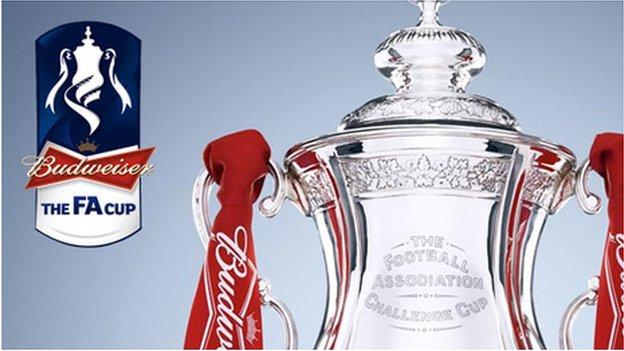 Shortwood United, the lowest ranked team left in the FA Cup, will host Port Vale in the first round after winning their replay at Aldershot.

The Southern League Division One South & West side beat the Conference Premier outfit 2-1 on Tuesday.

Daventry Town, also in the eighth tier, have been drawn away at Chesterfield.

There will be a Lincolnshire derby as Conference Premier side Grimsby host Scunthorpe United, of League Two, in the ties played on 9 and 10 November.

AFC Wimbledon, the phoenix club set up by supporters after the demise of 1988 FA Cup winners Wimbledon, will welcome Coventry City, the side that lifted the famous trophy a year previously.

League One leaders Leyton Orient, the highest ranked side to come in at the first-round stage, have a home tie against Conference Premier Southport.

There are four all League One ties with a Yorkshire derby between Rotherham and Bradford City, Walsall taking on Shrewsbury, Wolves travelling to Oldham and Sheffield United going to Colchester.