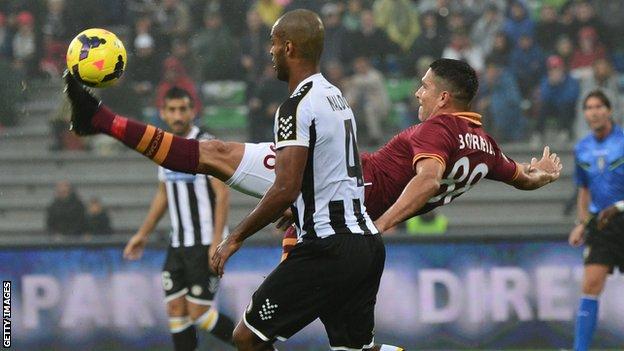 Roma equalled the record for the best start to a Serie A season as they won 1-0 at Udinese to claim their ninth victory in nine matches.

The Giallorossi's 100% run was set to end until substitute Michael Bradley struck an 82nd-minute winner.

The visitors were reduced to 10 men after 65 minutes when defender Maicon received his second yellow card.

Juventus won their first nine games in 2005-06, but were later stripped of their title for match-fixing.

Roma, who have conceded one goal this season, lead the current table with 27 points, five clear of Napoli and Juventus.

Under new boss Rudi Garcia, their impressive start has raised hopes in Rome of a first title since 2000-01.

Rafael Benitez's Napoli stay second after securing a 2-0 win over Torino, with two penalties from Argentine forward Gonzalo Higuain doing the damage as he took his tally for the season to five.

Torino finished the match with 10 men after Migjen Basha was shown a straight red card for pulling down Macedonia international Goran Pandev.

Carlos Tevez recorded his fifth Serie A goal since joining from Manchester City in the summer as reigning champions Juventus beat Genoa 2-0 to stay third.

The 29-year-old Argentine struck 13 minutes after Arturo Vidal had given them the lead from the penalty spot in the 23rd minute.

AC Milan's poor start to the season continued as Marco Parolo scored in the 90th minute to earn Parma a dramatic 3-2 win.

Massimiliano Allegri's side had scored two goals in two second-half minutes to come back from 2-0 down, with Alessandro Matri and Matías Silvestre finding the net.

But Parolo clinched the points with his second of the match, Antonio Cassano also scoring for Parma to leave Milan 10th in the table.

Bologna beat Livorno 1-0, their first win of the season, while Fiorentina won 2-1 at Chievo and Catania were involved in a goalless home draw with Sassuolo.