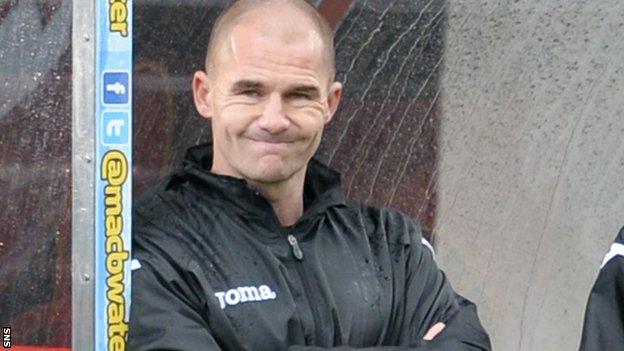 Partick Thistle manager Alan Archibald said his players were too respectful towards Celtic after losing 2-1 at Firhill in the Glasgow derby.

Georgios Samaras's 34th-minute header was cancelled out in the second half by Kris Doolan, but Amido Balde's solo effort sealed the win for Celtic.

"We said before the game, don't give them set plays," said Archibald.

"We knew they were a danger and everybody has a job to do, and they didn't do it properly."

Doolan's 67th-minute strike changed the complexion of the match at Firhill and, for spells, Thistle looked as likely as Celtic to secure three points in what proved to be a thrilling encounter.

However, the defeat now means Thistle have yet to secure a win at home in the league this season, a record Archibald had hoped to eliminate against Celtic.

"I thought we had a wee chance," said Archibald. "I was disappointed with the second goal we gave away.

"At the time, we had good possession of the ball and we ended up giving it away.

"That's what champions do, they score against you - they're very, very clinical."

Thistle started the match brightly enough and Aaron Taylor-Sinclair should have done better with a shot aimed straight into the arms of Celtic keeper Fraser Forster in the opening stages, but it was well into the second half before the hosts demonstrated a desire to take the match to Celtic.

Archibald said his players will need to show more of the same determination against other sides in the Premiership if they're to end their winless home streak.

"I thought in the first five or ten minutes we gave them too much respect," said Archibald.

"Once we got our foot on the ball and started to play it was a lot better. We showed what we could do on the ball.

"In the second half I thought we came into the game a bit more, and it showed.

"It's a hard one for me, because you're on the bench and you want to go for it, but at the same time you know they're clinical on the break and they can go from one end of the pitch to the other and they can pick you off.

"You don't play against Celtic every week. If you play like that against most sides, you'll probably win.

"We just go about our business in the same manner we always have.

"It was important we did that today, and I thought we did well in spells."