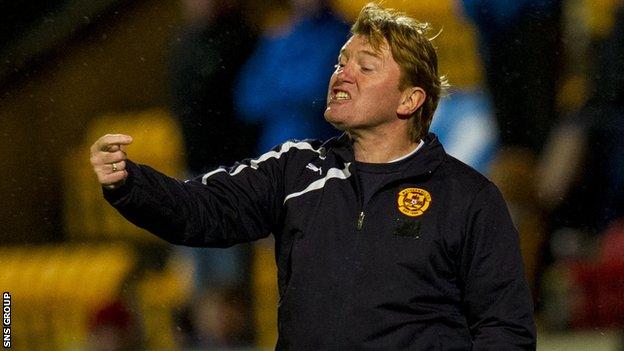 Manager Stuart McCall wants Motherwell to banish the memory of a lacklustre loss to St Johnstone when they face Aberdeen in a League Cup quarter-final.

"We've got a massive game on Wednesday and we need to improve," said McCall after the 2-0 loss in Perth.

"That was unlike us. We lost most of the battles individually and collectively. We were weak.

"Naturally, I'm disappointed. I don't want to accept to performances like that, but we can't get too down."

Stevie May and Nigel Hasselbaink were on target at McDiarmid Park with second-half goals as St Johnstone completely outplayed the visitors.

And the Steelmen will need to pick up their performance levels if they are to win at Fir Park with a semi-final place up for grabs.

"We need to bounce back quickly," said McCall, who was hoping for a win that would have lifted his side into second place in the Premiership.

"When we went a goal behind, we accepted it too easily.

"I can't put my finger on it; you get these days in a season. I had them as a player and I'll get them as a manager.

"I've got to balance it out with what we've done up until now.

"There's not a lot in this division and, if we are below our game, which we were today, then we'll get beaten.

"St Johnstone were better than us today and full credit to them. We got what we deserved, which was nothing."

Hasselbaink's goal was a gift from Motherwell goalkeeper Gunnar Nielsen, who slipped when trying to clear a wayward pass-back from Simon Ramsden.

However, McCall refused to apportion blame on what was a wet and stormy evening.

"It's one of those things," he said. "It's unfortunate when the keeper slips like that."