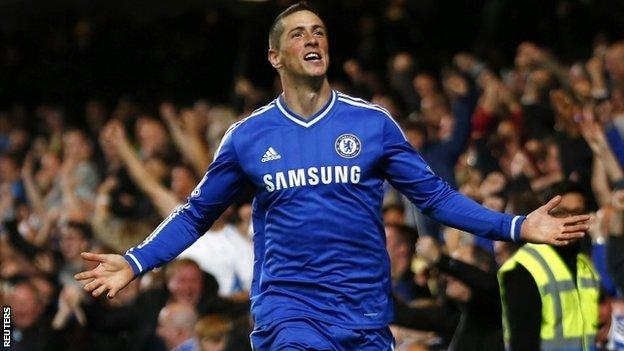 As Jose Mourinho ended up in the Stamford Bridge crowd for the second successive game, the man who put him there was taking the acclaim from the Chelsea fans who have never lost faith.

This time it was not an offended official who put Mourinho in among the supporters - as happened during Chelsea's win against Cardiff City - but Fernando Torres as the Spaniard pounced on a last-minute communication breakdown in Manchester City's defence to secure a 2-1 victory.

The graph of the Spain striker's Chelsea career contains many peaks and troughs, and declarations that "Torres is back" arrive as regularly as the buses that snake past Stamford Bridge, before it is announced that he is gone again.

Torres, most would accept, will never again be the player he was in those early golden years at Liverpool when he could justifiably stand comparison with the world's best.

And at £50m he is unlikely to convince everyone that at that time in January 2011 he represented little other than a vanity project for Chelsea owner Roman Abramovich and a rather tasty piece of business for Liverpool.

There is, however, a growing sense that the right buttons have been pressed in this most enigmatic of personalities, and under Mourinho he may just achieve the consistent excellence that has often eluded him since that move.

It should also be noted that for someone who has supposedly had such a torrid time since he left Liverpool, Torres has won a Champions League winners' medal against Bayern Munich in their own Allianz Arena and scored a brilliant goal in Chelsea's Europa League final win against Benfica in Amsterdam last season.

Throw in a Golden Boot as part of Spain's triumphant Euro 2012 campaign in Poland and Ukraine and you could hardly file his career under "unfulfilled". Plenty would settle for having a so-called torrid time that concluded with such an impressive collection of honours.

In this victory against Manchester City, one of such importance that his decisive goal sent Mourinho into the crowd behind the opposition technical area to fulfil a promise he made to celebrate with his son, we saw the different faces of Torres - but mainly the good ones.

He was left with a look of bewilderment when he blazed over horribly with only City goalkeeper Joe Hart to beat, but whereas in the past this might have led to a decline in his quality, he moved up to another level and genuinely showed flashes of the old Torres that had the crowd shifting forward in their seats when he had the ball.

Torres left Gael Clichy for dead to lay the opener on a plate for Andre Schurrle, then produced a run and shot that might have produced the finest goal of his Chelsea career, only for it to bounce off the woodwork.

And then, with the tightest of games moving into four minutes of stoppage time, came the moment that had his name ringing around Stamford Bridge.

The chant of "Fernando Torres - he scores when he wants" might be stretching it a bit but he showed belief and anticipation to take advantage when Matija Nastasic appeared to panic as Hart made an injudicious dash from goal, and the defender headed the ball past his keeper towards the unguarded net.

Torres made no mistake with the finish this time and another goal was added to the two he got in Chelsea's Champions League win against Schalke in Germany this week.

He is not the player of Liverpool vintage but he has fashioned an important place in Mourinho's plans that many thought would be beyond him when the Portuguese came back for a second spell at Stamford Bridge.

Mourinho told of a player who has simply forced his way into the team by exemplary attitude, sheer hard work and strength of performances. He revealed how he has worked tirelessly in training every day whether he won Mourinho's selection or not.

Schurrle insisted Torres remains world class while also talking about the hours he is spending in the gym and working alone in an attempt to find the ingredient that has occasionally been missing at Chelsea.

The old Fernando Torres, with the lightning pace that terrified defenders and instinctively made them take a hesitant step back towards their own goal, will not return to full effect but there is a still a very fine striker in there ready to come out.

Mourinho may need him, with Samuel Eto'o still feeling his way and Demba Ba clearly not regarded as a striker of significance, while Romelu Lukaku is creating havoc - but for Everton, as part of his development into a more complete player.

The latest resurgence in Torres is not simply reward for the player but also for Chelsea's supporters, who have rarely demonstrated any frustration during his fallow spells and have often willed him to rediscover the old brilliance even in his darkest times.

And those who watched and admired Torres at his best will also take pleasure in any revival of what was, at its peak, a truly special talent.

Torres is not back. The Torres of his pinnacle will not return. The Torres of today, however, currently appears more than good enough for Chelsea and Mourinho.