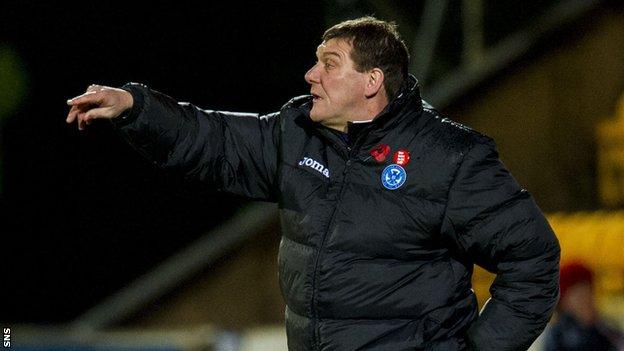 Manager Tommy Wright was delighted as St Johnstone bounced back from last weekend's loss at St Mirren to beat Motherwell 2-0 at McDiarmid Park.

Second-half strikes from Stevie May and Nigel Hasselbaink rounded off a convincing victory.

"It was excellent from start to finish," Wright told BBC Scotland.

"We emphasised to the players that if they kept on doing what they were doing, the goals would come. I'm really pleased after last week."

The victory puts St Johnstone into the top six with 15 points from 11 matches, with all of their league wins having come in Perth.

May's close-range shot after the half-time interval put the Perth side ahead when Motherwell keeper Gunnar Nielsen palmed away an overhead kick from Gary McDonald.

Fifteen minutes later, Nigel Hasselbaink pounced on a goalkeeping error to fire into an empty net.

May signed a new contract this week and Wright singled out the contribution of the 20-year-old striker.

"That type of goal is the type we want Stevie to score more of," said Wright.

"He's renowned for his shots outside the box and scoring spectacular goals, so for him to get another goal inside the six yard box, I'm delighted.

"It was a great effort, Gary McDonald with the bicycle kick - the keeper made a good save, and Stevie was alert, as all strikers are, and he picked up the rebound and stuck it away.

"I think that was testament to how hard the lads worked, to stop Motherwell.

"To beat Motherwell 2-0 and get into the top six is pleasing."