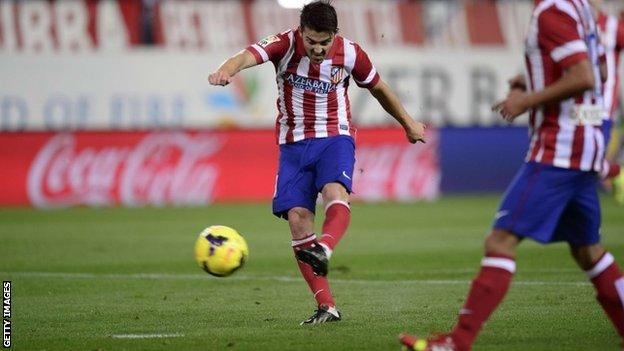 Atletico Madrid kept up the pressure on Barcelona at the top of La Liga with a 5-0 hammering of Real Betis.

Diego Simeone's side led within 14 seconds when 18-year-old Oliver Torres scored from close range on his first start.

David Villa doubled the lead with a header after the break and scored again with a powerful effort.

Diego Costa added a fourth from Villa's pass and Gabi scored from the edge of the box with the last kick.

Atletico, who have won nine of their 10 games, are one point behind leaders Barcelona and five clear of their rivals Real Madrid, while Real Betis remain in the relegation zone.

Villarreal kept up their impressive start to the season following promotion with a 4-1 victory over Valencia.

Ikechukwu Uche, Hernan Perez and Giovani dos Santos put the Yellow Submarine into a 3-0 lead. Giovani missed a penalty before Ricardo Costa pulled one back for the visitors. But the result was put beyond doubt when former Tottenham player Giovani got his second goal.

Real Sociedad moved into the top half of the table with a convincing 3-0 win over Almeria, who remain bottom without a win from 10 games.

Antoine Griezmann gave the Basques a 2-0 lead with a brace and Jose Angel wrapped the game up with 35 minutes remaining.