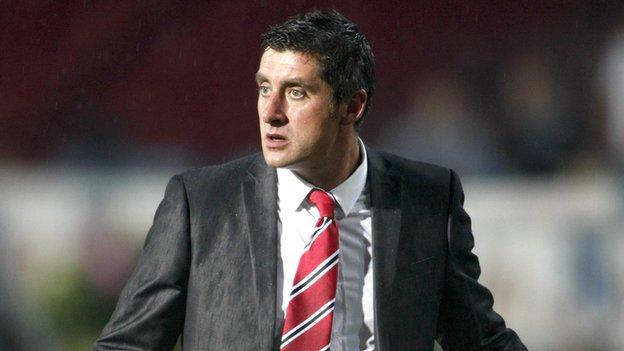 Derry City are on the lookout for a new manager after Declan Devine left the club on Sunday evening.

A Derry City statement said that the decision had been taken by "mutual consent".

Devine, 40, has been in charge since being appointed in January 2012.

He led the club to last year's FAI Cup but after a strong start to this season, Derry have struggled in recent months and his departure from the Brandywell is not a major surprise.

Derry's fourth-place finish in this season's League of Ireland will be enough to secure a European spot if Sligo Rovers defeat Drogheda United in next weekend's FAI Cup Final.

However, this didn't prove enough for Devine to hold on to the job.

With a number of Derry players currently out of contract, the club are likely to be keen to appoint Devine's successor reasonably quickly.

After a dismal run of form from July through to September, Derry's results have improved over the last couple of weeks.

The club were unbeaten in their last four league games and the season ended with a 6-0 thumping on Limerick on Friday evening.

However prior to the October improvement, Derry had lost eight of their previous 12 league games.

Prior to the mid-season break in June, the Candystripes had been challenging strongly for the title after an opening run of 11 wins, two draws and four defeats.

After the defeat by Dundalk on 30 September, assistant boss Paul Hegarty acknowledged that a likely clearout from the club at the end of the season could include the management.

"I can hold my head up in what I have done here," said the Derry native.

"I won a Cup last year. Hopefully I got the club into Europe this year so I'm quite happy with the job I've done."

During his playing career, former Ipswich Town apprentice Devine had a couple of spells at Derry City in addition to playing for Glentoran, Omagh Town and Institute.

After working as Derry City's youth development officer, Devine was appointed as club first team coach by then manager Gavin Dykes in 2003.

The club's following manager Stephen Kenny opted to retain Devine in that role and he became part of the Dubliner's backroom staff at Scottish club Dunfermline in December 2006 after the duo left the Brandywell.

Kenny's return to Derry City saw Devine again becoming his number two and the Maiden City man took over as manager in January of last year after the Dubliner was appointed Shamrock Rovers boss.