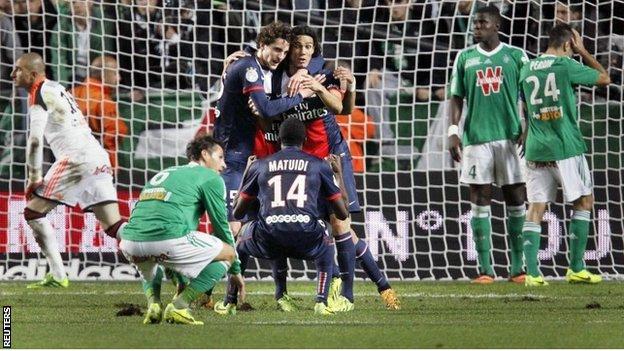 Paris St-Germain stretched their unbeaten record in the French Ligue 1 to 22 games after a dramatic 2-2 draw away to 10-man St Etienne.

The leaders found themselves behind to Benjamin Corgnet's fine finish in the 18th minute before Romain Hamouma doubled the lead after 51 minutes.

But St Etienne were unable to hold on after midfielder Fabien Lemoine was sent off for two yellow cards.

Laurent Blanc's side had lost their place at the top of the table after Monaco beat struggling Lyon 2-1 earlier.

But PSG, who failed to produce a shot on target in the opening 45 minutes, returned to the top on goal difference and remain unbeaten in the league since 2 March.

Radamel Falcao scored his eighth goal of the season as Monaco kept the pressure on Blanc's team.

Midfielder Mounir Obbadi gave Monaco the lead in the 28th minute with his first goal of the season before Falcao struck seven minutes later.

Bafetimbi Gomis pulled a goal back for Lyon, who are without a win in five league games.

Montpellier's Yassine Jebbour was shown a straight red card in the 18th minute for a dangerous high tackle on fellow defender Lucas Orban.