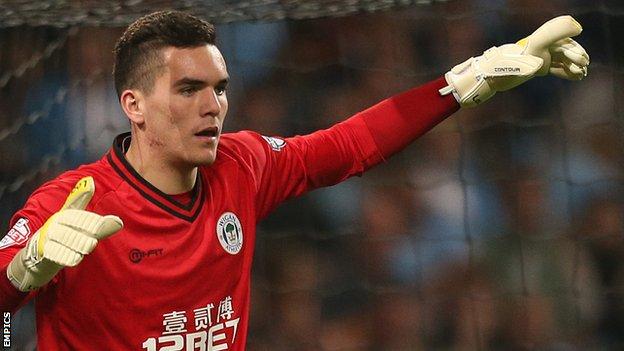 Wigan boss Owen Coyle praised the maturity of goalkeeper Lee Nicholls after he made a number of saves on his Championship debut at Charlton.

Regular keeper Scott Carson went over on his ankle in the warm-up so Nicholls only had a short time to prepare.

"He took his crosses, he came and looked a real man and that is great for the football club," said Coyle.

"He was outstanding. To get a shut-out - ordinarily with the chances we create that would result in three points."

The 21-year-old had only one previous appearance for the club when Manchester City scored five past him in the Capital One Cup in August, although he gained league experience last season when he was ever-present in League Two while on loan at Northampton.

I don't think I had any time to be nervous, it was just basically be prepared for the game

"He had 25 minutes to prepare for his debut in the Championship and he came in and everything he had to deal with he looked as though he was a seasoned campaigner," Coyle told BBC Radio Manchester.

"I've got tremendous belief in him, that's why I took him pre-season, I played him at Manchester City and we know in time he's going to be a top goalkeeper.

"We've now got four out of the next five [Championship] games at home and we've got to make sure we're picking our points up. If we do that it will catapult us up the league."

Northampton boss Aidy Boothroyd compared Nicholls to England international Ben Foster after a string of impressive performances at Sixfields last term, as he helped the club reach the play-off final.

"I don't think I had any time to be nervous it was just basically be prepared for the game," said the England Under-19 international Nicholls.

"I did well at Northampton, we went all the way to Wembley and we were unlucky not to be promoted.

"I think my first touch was quite good coming out for the cross so I was quite positive with it and I've just built on that."