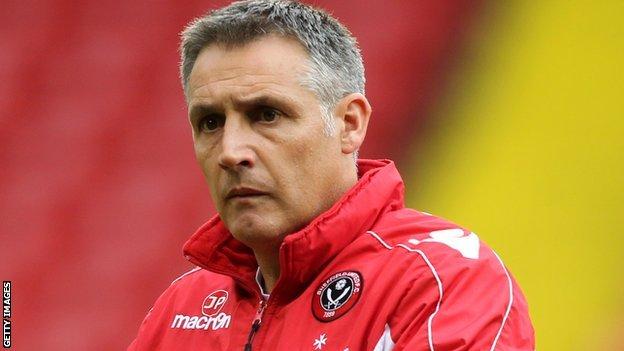 Bristol City assistant John Pemberton says the club are delighted to have "scrapped" to their first win of the League One season at Carlisle.

The Ashton Gate outfit's last league victory came in the Championship against Middlesbrough on 9 March.

But they fought back from a goal down to beat the Cumbrians 4-2 on Saturday to end their 21-game winless run.

"It was all about the scrap and getting the three points. We did what we had to do," Pemberton told BBC Radio Bristol.

"It's been a long time coming. We've been unlucky in a few games this season, which has been well documented.

"So many times we've conceded silly goals at the end of games this season and it was so nice to finally get over the line.

"As you can imagine everyone is really pleased and hopefully it sets us up nicely for two home games."

And Emmanuel-Thomas proved his worth by scoring his first professional hat-trick in the second half, which added to Scott Wagstaff's impressive volley.

"His goals were terrific and it was the perfect hat-trick," said Pemberton.

"We know what he's capable of doing and it's documented what he's not good at. We need that maverick player. For all the stuff he doesn't do, he gives us a chance to score a goal."

O'Driscoll had come under scrutiny for City's poor run of results in recent weeks, but vice chairman Jon Lansdown voiced his support to the head coach, urging fans to be patient.

And Pemberton moved to reassure supporters that the players and staff were fighting to turn around their fortunes.

"It's been really difficult but I can stand here, hand on heart, and say everyone has done everything they can. We've not left a stone unturned in our preparation," he added.

"It's nice that it's all come off and people can enjoy the win. It's going to be a rollercoaster ride and we just ask the fans to hold on tight and enjoy the ride."