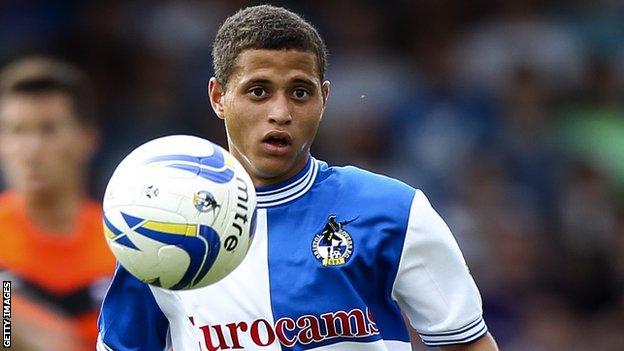 Santos, an 18-year-old Brazilian-born winger, was singled out for his impressive second-half display.

The kids are alright

The average age of Bristol Rovers' outfield players against Chesterfield was 21, with Alefe Santos the youngest at 18.

Rovers boss Ward revealed: "Humphreys, the left-back against him and experienced guy, said to me 'your right winger is going to be a good player'.

"When a fellow professional says that to you on the pitch - that's respect."

Santos spent time with Stoke City as a schoolboy before joining Rovers on a two-year scholarship scheme in the summer of 2011.

He made his first-team debut while still a second year scholar, as a substitute against Port Vale on 20 November 2012.

The right-sided player signed his first professional deal this summer and has played 12 games this term, scoring once against Mansfield.

Seven of Rovers' starting XI against Chesterfield are under the age of 22, and Ward realises that Santos, the youngest in the team, still needs to develop as a first-team player.

"We have to bear with these kids. He's a talent we will nurture at this club," the Pirates manager told BBC Radio Bristol.

"This is a huge level for him. He's played at youth level in front of 30 people - mums, dads and dogs - but he's come in here where it matters big time to 6,000 people.

"In his eyes it's a big occasion and he's quite right to think that. If he wants to have a career at the top level then he's got to cope with this, and he's shown that he can.

"It doesn't phase him and it's good I can push him in to the first team and he's going to learn from it."