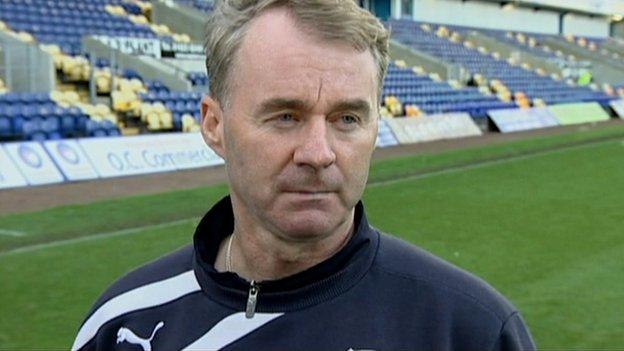 Plymouth Argyle boss John Sheridan said Saturday's last-gasp 1-0 win over Mansfield Town could be the catalyst for a change in fortunes for his side.

Neil Trotman scored in the 93rd minute to give the Pilgrims their first win in eight league games since 7 September.

"We haven't played well and we've won so sometimes it's what kick-starts your season," Sheridan told BBC Radio Devon.

"The most important thing is to get three points and it's great to score at the end and give everyone a break."

Argyle still have the worst goalscoring record in League Two with just nine goals all season and Sheridan admitted it was a victory based more on defensive resilience than attacking verve.

"It was a battle and the defenders were outstanding for us," added Sheridan.

I feel like the supporters did at the end

"I knew they'd be in for a good scrap against Mansfield, who are very effective in how they play and they caused us problems.

"We defended as a team but our defenders and Luke McCormick in goal stood firm."

Sheridan tinkered with his formation again, opting to play a 3-4-3 system after recently experimenting with a 3-5-2 line-up.

"It was quite similar to the way Mansfield play - we're after a goal but I don't think it really worked first half," he admitted.

"But we need to score goals to win football matches and we had a go. I don't think we played well, but there was a lot of determination and will to win.

"Sometimes they're the best results - we haven't played well but we've won and I'd rather say that a few more times.

"I'd like us to believe in ourselves a bit more and pass the ball. With the kind of players we've got in the team, I don't think we're the kind of team who can get in a scrap."

After nearly two months without a win, Sheridan said he could empathise with the reaction of the travelling Argyle fans.

"I feel like the supporters did at the end," he said.

"I'm chuffed for them. They've come a long way, so to score in the last minute means everyone can go home with a bit of a smile on their face.

"It's a long, long season and we know we've got to go on a run. We don't want to get carried away but it's a really good three points and I'm pleased for the players."