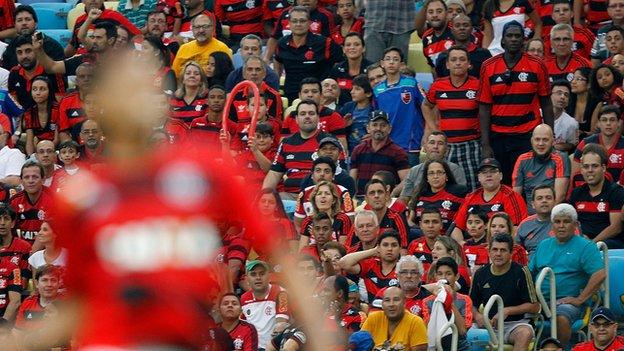 Around the turn of the century Rio giants Flamengo had a player called Maurinho, a central midfielder who they were attempting to convert into a right back.

The fans hated him. In every game he was on the end of some rough treatment from the terraces.

Then, one afternoon, the Flamengo supporters started calling for him to be included in the Brazil squad. Had they suddenly had a massive collective change of mind? They soon reminded everyone of the date - it was 1 April.

I recall being at the Maracana stadium for one match where the fans unfurled a giant banner, on which was written 'Fora Maurinho' - Maurinho out.

Then he scored with an excellent volley. And so the fans quickly covered up the part of the banner which contained the word 'fora,' and danced in front of his name as if the goal had been the result of their encouragement.

These memories came flooding back a couple of weeks ago when I was at the Maracana for another Flamengo match. 'Jaime, we are with you,' proclaimed a banner behind one of the goals - a reference to the club's new coach.

Steeped in Flamengo, Jaime de Almeida is the son of a former club great, as a player and also as a coach, in the 1940s and 50s.

The son also played for Flamengo as a centre-back in the 70s, and has been on the coaching staff for the last few years, stepping up to the top job last month following the sudden resignation of former Brazil boss Mano Menezes.

It is only natural, then, that the supporters feel a certain affinity with him.

But with six minutes to go, the score tied at 1-1, and visitors Bahia dominating, Jaime de Almeida decided to take off Elias, the club's star player.

Replacing him was Val, a workmanlike midfielder who has yet to find a place in the fans' affections.

The stadium erupted. The Maracana became one giant boo as the crowd gave voice to their displeasure. Instinctively I looked over to the banner. A group of fans had started to take it down. They were with Jaime no longer.

Within a minute, however, Flamengo launched a break and scored the winning goal. Another glance at the area behind the other goal revealed that the operation to remove the banner had been aborted. Now they were striving to put it back up again.

The fans were back with Jaime.

Nearly two weeks later they are with him all the more - though, of course, that may only last until the next controversial substitution.

He is edging the club towards safety in the home straight of a league campaign where half the clubs still have cause to worry about relegation.

And he has qualified the team for the semi-finals of the Brazilian Cup - in emphatic manner, against one of the club's local rivals.

In last week's second leg of the quarter-final, with scores level after the first game, Flamengo crushed Botafogo 4-0.

One of the abiding memories of the game comes not from the pitch but from the stands. Come the final whistle the Botafogo end was all but empty, their fans slipping away early into the night in a bid to escape the humiliation. Flamengo supporters loved it, whipping out their mobile phones to take photos of the deserted seats.

So Botafogo are out of the cup. But they still have plenty to play for in the league.

This could be a historic year for the club; they are on course to qualify for the Copa Libertadores, South America's equivalent of the Champions League, for the first time in almost 20 years.

The players were reminded of this during Saturday's home game against Atletico Mineiro. There was a banner in the stands - 'qualifying for the Libertadores is an obligation.' Turning up to help them do it clearly was not. The crowd was just 6,472.

Admittedly, this is near the end of the month, when money can be tight, and ticket prices are probably too expensive. But even so this was a dismal attendance - though sadly predictable.

Although this was an important game against attractive opponents (current champions of the continent, no less), the short-term mentality rules.

Objectively, this looks like being a wonderful moment to be a Botafogo supporter; the presence of Clarence Seedorf has had a galvanising effect, and after some barren years the club is starting to develop some interesting young talent.

Teenage left-footed centre-back Doria looks on his way to great things, and midfielder Gabriel is also one to watch. But over the last month the team has shown signs of running out of gas, and the thrashing by Flamengo was a humiliation too far for many of the fans.

When the team most needed their support, they stayed away.

These little anecdotes of Rio football may be extreme examples. But they serve to highlight a central point, worth stressing as the game in its organised form celebrates its 150th birthday.

Football is a universal language which is spoken with different accents. And your approach to the game reveals much about your identity. This applies not just to how you play, to how much emphasis is placed on strength, or on skill. It also applies to how you support your team.

Brazil, for example, is a country of low self-esteem. Perhaps this will be transformed by economic progress, but it will not happen overnight. Football brings this trait to the surface.

In order to avoid humiliation (a powerful concept in Brazilian society) fans give themselves a get out - if the team is losing, they say, it is not my representative. It might be my club, but it is not my team.

Some of these issues will be played out in front of the global gaze during next year's World Cup. The host's games will be played in an extraordinary atmosphere, and the crowd will be 100% behind the team - as long as they keep winning.

How would the top teams in South America do in the Champions League?

This is clearly a subjective opinion, but for what it's worth, my humble view is that currently they would not do well at all. I think they would have huge problems against the dynamism and individual ability of the top European clubs, with their squads drawn from the best players all over the world.

The World Club Cup is an unreliable guide, but in the last few years the only time the match between the Europeans and the South Americans was an even fight was last year, when Corinthians beat Chelsea, hardly the most outstanding winner of the Champions League.

Even then, Corinthians' success was built on defensive solidity - in their two games they totalled two attempts on target, Paolo Guerrero's goals in their 1-0 wins. I worry for Atletico Mineiro if they try to meet Bayern Munich in an open fight this year.

However, if the South American clubs had access to the kind of money generated by the Champions League then it might well be a different story. If they could hold on to their best players and buy in stars from elsewhere, as the Europeans do, then they would have a much better chance.