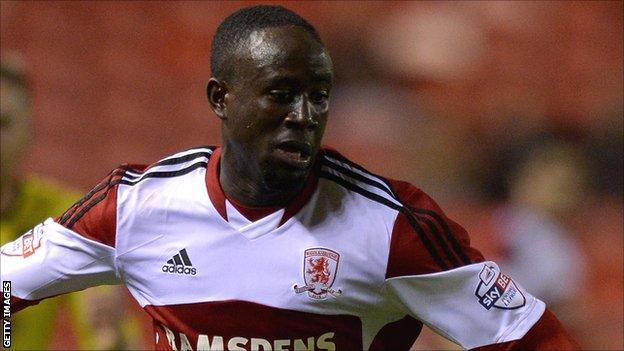 Middlesbrough winger Albert Adomah has said he will always be grateful to former Boro manager Tony Mowbray for the chance to play in the Championship.

Mowbray, who was sacked by the Teessiders last week, brought the Ghana international to the Riverside from Bristol City in August.

Adomah has since been a regular for Boro, scoring six goals in 12 games.

"It's a shame that Tony Mowbray has gone as he was the one who signed me," Adomah told BBC Tees.

"If it wasn't for him I wouldn't be here now. I'd like to take the opportunity to say thank-you to him.

"It is a shame you can't sack all the players, you can only sack the manager."

Boro responded to the departure of former captain Mowbray with a rousing 4-0 home victory against Doncaster on Friday night.

And Adomah, who was twice on target and has now scored five times in three games, said it was unfortunate the win came after Mowbray's departure.

"It is a shame but it now gives Mark Venus the opportunity. Hopefully, after this victory, it would be good for him to get the job to start his managerial career," he added.

"The victory always seems to come when the manager goes."