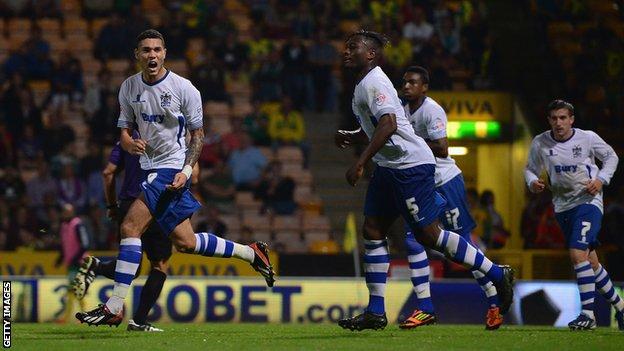 Bury caretaker manager Ronnie Jepson has said his players' are beginning to show more belief after their first away victory of the season at Wycombe.

It was Jepson's first win since it was confirmed he will remain in caretaker charge of the Shakers until January following Kevin Blackwell's sacking.

If we do well we might look at it a bit differently come January, if not, I'll shake everybody's hand and go

"Nobody expected us to come and get anything, but we did," said Jepson.

"We've had a great week and we've got a little bit of belief coming back and hopefully we can go on from here."

Soares' second-half strike was the Shakers' first goal in four games, with the side having dropped down the League Two table following an impressive start.

A run of just two points from six league games cost Blackwell his job, and assistant Jepson has been in temporary charge since.

"The chairman has asked me to stay until January to get a bit of stability into the club," Jepson told BBC Radio Manchester.

"If we do well we might look at it a bit differently come January, if not, I'll shake everybody's hand and go.

"Whilst I'm here I'll give it 110% and so will the players, win, lose or draw, and that is one thing I can guarantee the supporters and the chairman.