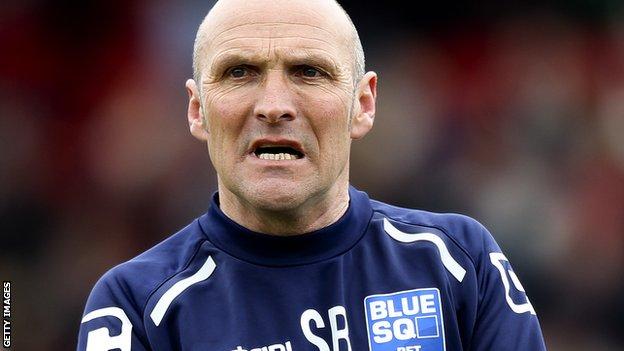 Kidderminster manager Steve Burr has praised his players' attitude against Bradford Park Avenue in their FA Cup fourth qualifying round tie on Sunday.

In tricky conditions on a sodden pitch, Harriers battled to a 1-1 draw against the Conference North side to secure a replay at Aggborough on Tuesday night.

"It was our toughest game this season," Burr told BBC Hereford and Worcester.

Kiddy in the FA Cup

Harriers have not progressed beyond round one since the 2008-9 season. That year they made it to the third round but lost 2-0 to Championship side Coventry City.

"It had upset written all over it so I'm really proud of how determined the boys were to dig in and get a replay."

Kidderminster were beaten in the first round of the FA Cup by Oldham last season but this year will face either Hemel Hempstead Town or Sutton United at home if they can get past Park Avenue.

But it is likely they will have to do so without five-goal top scorer Michael Gash, who missed the weekend's original tie because of a hamstring injury.

"I think the replay will come a little too early for Michael," Burr added.

"I'm confident the lads will get us into the first round where we'll be strong favourites to go through."