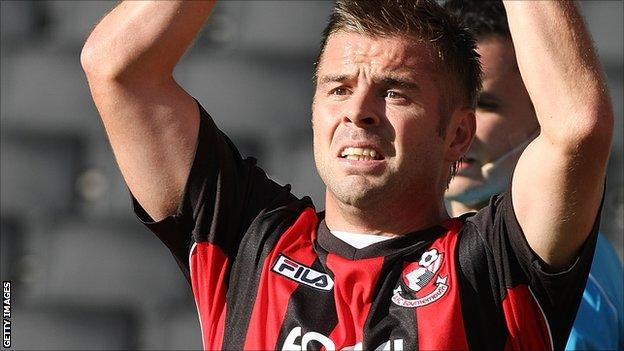 Poole defender Warren Cummings says he is "excited" by the prospect of facing Brentford in the first round of FA Cup but has warned his team-mates not to be complacent in Tuesday's replay.

The Dolphins are bidding to reach the first round for the first time since 1983 but must defeat Staines.

Poole drew 0-0 with the Conference South side on Saturday and will now take them on at their Tatnam home.

"It would be massive to get there," Cummings told BBC Radio Solent.

The former Bournemouth defender has played in the first round several times before with the Cherries, but never with the Southern League Premier Division outfit.

And with the prospect of travelling to Griffin Park in the first round, he admits the club need no more motivation.

"There was no added incentive required for us to get to the next round but certainly having seen the draw if anyone wanted an extra incentive we've certainly got it now," he said.

"We have to give them the respect they deserve. They are in the league above us because they have good players and have to be slight favourites.

"We should be confident after Saturday's performance as we were the better side for long periods but we are respectful of how good they can be and we are very much the underdog."

Having played in the first round with Bournemouth, Cummings admits it would feel different travelling to Brentford as both the underdog and as a non-league side.

But having lost to non-league opposition in the form of Accrington and Blyth Spartans, he admits it would be nice to have a different experience of the competition.

"It feels different," he said. "It would be an amazing thing to achieve, the first round proper, and then with the carrot of a tie at League One Brentford is something that I'm excited about and I hope we can fulfil what we started on Saturday.

"It could be the highlight of some of the lads careers and I'm excited by that prospect.

"I would love to do that, it would be fantastic for the shoe to be on the other foot. Staines will be feeling the same excitement and we hope we can take out chance and then if we do it will be something brilliant to look forward to."