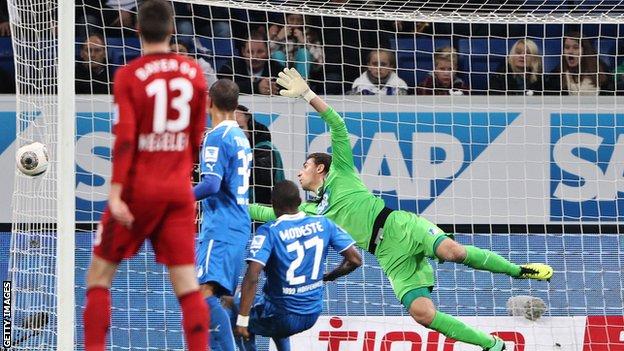 Hoffenheim's call for their Bundesliga game against Bayer Leverkusen to be replayed after the awarding of an incorrect goal has been rejected.

Leverkusen striker Stefan Kiessling headed the ball through a hole in the side of Hoffenheim's net in his team's 2-1 away win earlier this month.

Referee Felix Brych did not spot that Kiessling's effort missed the target.

But, despite Hoffenheim's protest, the German Football Association (DFB) insists the result will stand.

"The decision may be unsatisfactory from a sporting point of view but it is according to the rules and laws," said Hans Lorenz, president of the DFB's sports court.

Hoffenheim have one week to decide whether they will appeal the decision, which was made at a hearing in Frankfurt on Monday.

Fifa referee Brych told the hearing that he awarded the goal, which put Leverkusen 2-0 ahead, after consulting with his assistant.

"I thought that the ball was going wide. I lost it because my line of sight was obscured, And then I saw the ball in the goal," said Brych.

Germany international Kiessling, 29, has been criticised by some Bundesliga fans for not challenging Brych's decision.

"I saw the ball fly in the direction of the side-netting. My view was blocked and I did not see the impact, but the ball was in the goal," said Kiessling.

"My first thought was that the goalkeeper had turned it in himself. I thought of everything, but not really of a hole in the net."

Third-placed Leverkusen, who are one point behind leaders Bayern Munich, were leading through Sidney Sam's 26th-minute opener when the controversy happened on 18 October.

Kiessling headed a corner wide of the near post, and could be seen turning away in frustration before Brych awarded the goal.

The referee then gave Hoffenheim a generous penalty when Roberto Firmino was fouled outside of the penalty area. But Firmino's spot-kick was saved.

Sven Schipplock pulled a goal back for Hoffenheim two minutes from the end, but they could not save a point and fell to their first home defeat of the season.