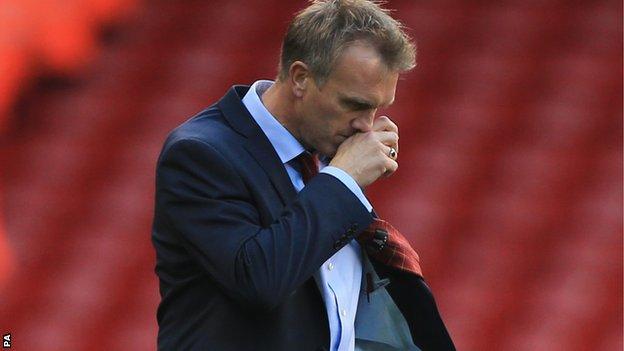 a result that has left them 22nd in the League One table.

As a defender you're judged by the mistakes you make. It is simple - just mark your man

They have now conceded 31 goals this term - the most in the Football League.

"There hasn't been much in a lot of our games this season but we are conceding ridiculous goals at set-plays because some players are just not marking their man," he told BBC Radio Stoke.

"It's the same old mistakes and we are really going to have to look at it. I'm disappointed."

Last term, the Alex kept 11 clean sheets in League One on their way to a comfortable 13th-placed finish.

But thus far this campaign, they have managed only two shut-outs and they have not been involved in a goalless draw since September 2012.

"Of course, the anticipation is not good enough at these set-pieces and if you look back a little further you can avoid the situation entirely by not giving away silly free-kicks," Davis added.

"But regardless, it is simple - you just have to mark your man.

"Against Sheffield United, George Ray has done okay in the whole game but as a defender you're judged by the mistakes you make and he made two crucial ones that cost us goals."