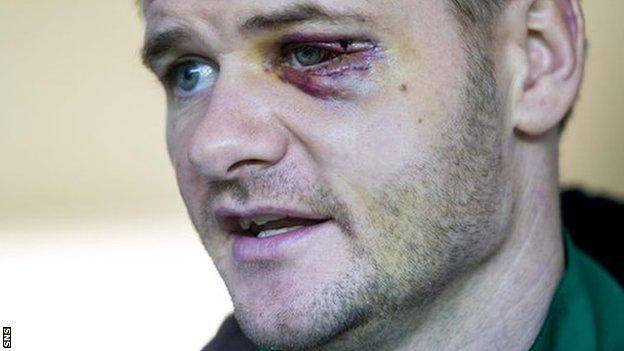 Hibernian defender Michael Nelson plans to wear a protective mask to speed his return from a fractured eye socket.

Nelson was injured in a clash of heads with Celtic striker Amido Balde in a 1-1 draw on 19 October.

The Englishman said on Twitter that his black eye turned out to be three fractures, leading to an operation and two metal plates being inserted.

"I'm not sure how long I will be out for at the minute, but I hope to get back wearing a face mask," he said.

That black eye turned into three fractures, an operation and two metal plates in my cheekbone

Nelson missed Saturday's 2-0 defeat by Aberdeen in the Scottish Premiership and will also be absent for Wednesday's Scottish League Cup quarter-final derby at home to Hearts.

And the 33-year-old says "it will still be a few weeks" before he will be able to return to action, even wearing a mask, following an injury that turned out to be worse than first feared.

"Well, that black eye turned into three fractures, an operation and two metal plates in my cheekbone," he tweeted.

"Can't do anything for a while, so I'm frustrated. Hopefully won't be out too long."

Nelson had previously posted a picture of his black eye as he took exception to Celtic manager Neil Lennon's suggestion that Hibs had used rough-house tactics against the reigning champions.